‘The Jumping Off Point’: Cherokee looks to build from Language Symposium

Cherokee has taken its next step towards language preservation.

On Thursday, Jan. 30 and Friday, Jan. 31, a Cherokee Language Symposium was held at the Cherokee Youth Center. The Eastern Band of Cherokee Indians Education department worked with the Office of the Principal Chief to hire three consultants to come and analyze the operations of language learning on the boundary. This was a three-day process that ended with two days of meetings. 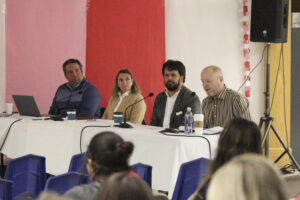 Three consultants were set up as a panel for the two meetings held as part of the Cherokee Language Symposium on Jan. 30-31 at the Cherokee Youth Center including, starting second to left to right, Sheri Tatsch, Benjamin Frey, and Wyman Kirk. (JONAH LOSSIAH/One Feather photos)

“I think the results of this week were pretty phenomenal,” said Sheri Tatsch, one of the consultants for the symposium.

“I’ve never seen a group take suggestions that they heard the day before and make definite plans. I mean, there’s dates, there’s times. They know who’s involved, people are calling in. That’s usual. That’s really unusual to just take that step immediately. We were talking about these 30-60-90 days, well these folks did it in a day, which shows, I think, the dedication and the love for what they have. What’s theirs,” continued Tatsch.

The overwhelming takeaway from the meeting was a need to increase communication and the sharing of knowledge and materials in Cherokee. That means many things.

Benjamin Frey, another of the consultants, talked about the need for a connected database.  He said this would greatly help facilitate the growth and sharing of materials between the language learning programs. He said that it could help instructors build on what was already there and help limit redundant work. 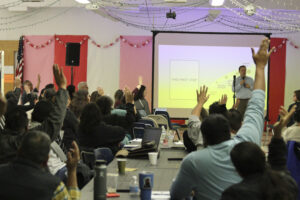 Engagement was crucial through the two meetings, with everyone focused on the same goal.

Frey, who teaches Cherokee at UNC-Chapel Hill, said that this week was an essential step for moving the language forward as a unit. He focused on what it meant to him to see everyone come together to discuss the future of their culture.

“How much everybody cares and how much healing there is to do. I think that because everybody cares so much, it becomes easy to get mired in the scarcity mindset and lose focus of the enormous value that the language has,” said Frey.

Frey said that community is going to be extremely important for language preservation and that he knows it can be done with the right mindset.

“I think that’s the most important part of language learning, that’s often overlooked, is people have to be at peace. There’s that ‘to-hi’ concept that we have. They talk about the harmony mentality in Cherokee society and thought. That sometimes a conversation won’t even begin until everybody feels at peace and seen,” he continued.

Garfield Axe-Long, a curriculum coordinator at the Kituwah Preservation and Education Program (KPEP), shared a similar sentiment when it comes to the next step that is needed for learning.

“I think, of course, the communication and willingness to work with each other. I think putting differences aside, and for me when I say differences, I’m mainly talking about dialectal,” said Axe-Long. 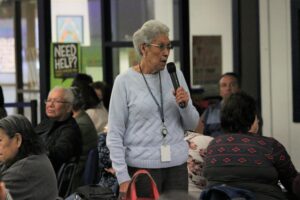 Myrtle Driver Johnson, an EBCI Beloved Woman and fluent speaker of the Cherokee language, spoke to the panelists and the audience during the open discussion portion of the symposium.

He said the numerous dialects of the Cherokee language can create barriers; not because of a lack of understanding but because of an unwillingness to for some accept others.

“If we want to continue nurturing the language, we have to get passed that,” said Axe-Long.  “Because I have yet to hear two Cherokee speakers that have been raised speaking the language…tell each other ‘that’s not the way you say it’. But, some of them are quick to tell a second-language learner that. And why, I do not know. And, I think that’s one of the biggest problems we have right now because self-consciousness becomes evident with second-language learners. And, they are reluctant to say anything in the language to a Cherokee speaker.”

Axe-Long said that while a focus on the language is important, he felt he heard some of the information before.

“For me, it was just more like a lot of the stuff was kind of rehashed from previous symposiums that I’ve attended. I’m not saying that it was bad or good, it’s just I guess I’ve been there more than once.”

Hartwell Francis, who is a curriculum developer at KPEP, said that he wishes the consultants had more time to absorb all the information offered to them.

“They had to see and understand more than humanly possible, and also they were exposed to very little,” said Francis.

Francis continued by saying that he was extremely appreciative of the time the consultants put in this week, and that is was a positive experience overall. He said that he was happy that community leaders are giving the time to the language and doing the analysis that is needed to improve. He also said that he loved seeing how Friday’s meeting progressed. Towards the end, community members became more involved with their ideas, and people made plans to meet on specific topics moving forward.

“I think just bringing us together to have that meeting showed us all again all of the positive things that are happening in this community for Cherokee language and culture learning.”

James Bradley, the director of EBCI Education, was one of the organizers of this event. He said he was thrilled with how the week went.

“I have to admit, I was very tense early in the week, because I didn’t know. ‘I think this is going to work and think this is going to be good, but I don’t know.’ And then yesterday [Thursday], seeing people come in and then start sharing and talking. It relieved all that anxiety. I was just really grateful that everybody showed up, and everybody participated,” said Bradley.

He said that the next step is to get the final report from the consultants, and from there, it will be time to build a plan.

“We have to come up with 30-60-90-day goals, that’s what the Chief wants. When we set our goals, it’s 1-3-5-year benchmarks. So, that’s the structure we’re going to be working in. There’s already great stuff happening.”

Bradley says that there are few ideas they are focused on currently. One is a 25-person language class that takes EBCI employees through a two-week language program. They would be immersive, 8-hour days, and the employees would be paid their regular salary for attending. It would be built as a cohort system to allow students to grow together and be able to build with the next classes.

Another idea would allow tribal members to go through Higher Education to take online language courses offered through the likes of UNC Asheville and Western Carolina University.

“I’m really, really happy. I’m really excited. I’m hopeful that we can take what we already have and make it even better and more accessible for everybody,” said Bradley

Tatsch said that these kinds of initiatives will help immensely helpful and that she has been encouraged by the tribal government’s willingness to assist both with time and financially.

“It’s huge. That is a stumbling block for a lot of tribes and nations that I’ve worked with in the past. You can do it with no money, but you’re doing it at the kitchen table. And so, the efforts become very small, and again the people become isolated. That’s one of the things that I’m hoping that this week has done, and it was expressed by some people that they feel isolated. And, the isolation now has begun to move away.”

The consultants will have a final report offered to the Tribe by Friday, Feb 7. It was announced that the Tribe would then be sharing that report as well as any follow-up statements within a week of that day.

“We can. We can do it as long as we work together. That’s always what our people have done. I mean, we survived here for 14,000 years with nobody to depend on but each other and the creator. And we did that successfully. We did it because we knew how. We still have that knowledge, and we still have that tradition,” said Frey.