The Chief Joyce Dugan Cultural Arts Center will be filled with the sounds of Broadway on the evenings of Feb. 27-28.  Students in the Cherokee Performing Arts Program at Cherokee Central Schools will present “Braves on Broadway”, a selection of songs from various musicals, at 6 p.m. each night.  Tickets to the show are $5.

A total of 16 solo performances will be held along with a few group presentations.  Most of the performers will be Cherokee Middle School (CMS) students, so they can gain valuable stage time, with a few Cherokee High School seniors being invited to perform as well. 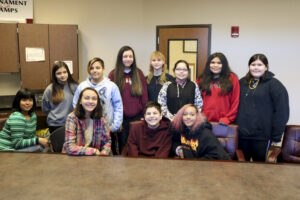 “Solo time is actually huge,” said Michael Yannette, Cherokee Central Schools director of musical theatre and chorus, who added that being able to do a solo on stage is a huge self-esteem booster.

Of the CMS students, he noted, “At the beginning, there were probably two of the students that were ready to get up and do a solo because it’s terrifying.  It’s probably more terrifying for them to do it in front of each other than it is to even do it for their parents.  There is that process of accepting who you are, and being ok with it, and then opening up.”

Yannette said this experience will help them going forward.  “As they develop into the high school program, they would have already had that first time of doing that in such a big way.”

Since the students will be performing songs from musical theatre, there is the acting aspect, and they received help from Valerie Tissue, Cherokee Performing Arts Program dance instructor.

“We’ve tried to work in small groups because it’s a very vulnerable place to go for these young kinds,” said Tissue, who also helps with overall performance choreography.  “Even as adults it’s vulnerable but especially when you’re in front of your peers in middle school – that’s intimidating.  So, we pull them out in these small groups and then we ask them to go places that maybe they’ve haven’t gone before as far as tapping into what your real life is like.  Can you use that in your song?  Because, that is what theatre and art is really all about.”

She added, “We’re trying to go to that next level where they’re not just standing and singing a song, but they can use this as a form of expression and as a catharsis to help them deal with whatever it is.”

Brody Barker, a CMS eighth grader, is set to perform “What It Means to be a Friend” from “13 the Musical”.  “Yannette showed it to me, and it was really relatable.”

He is one of the students not new to the stage as he played the part of Young Simba in the school’s recent production of “Lion King Jr.”.  Stage fright is not on his mind. “I’m excited,” he said of his upcoming solo.

Joselyn Long, a CMS seventh grader, will perform “This is Me” from “The Greatest Showman”.  “It is one of my favorite songs from the movie,” she noted.  “I think a lot of people can relate to it.  I can relate to it because I have very few close friends, but they like me for me.”

It will be Long’s first time alone on stage.  “I’m a little nervous and a little excited.”

Emerald Quijada, a CMS seventh grader, will sing “How Far I’ll Go” from “Moana”.  One of her friends suggested she try the song, and Quijada decided to try it for the show.  “It is very relatable but has different meanings even than what you see in the movie.”