Following the final game of the season, it was time for the Mustangs to find new leaders.

Though most would consider this a successful season, Smoky Mountain had fallen to South Point 42-35 in just the first round of the state playoffs.

Colin Crowe, a member of the Eastern Band of Cherokee Indians, has his sights set on the Mountain 6 Conference Lineman of the Year award this fall. (Photo by Rebekah Smith)

On this team, there is a symbol of rank. It’s a simple one, but it speaks volumes. The leaders of the team lift weights at the racks in the middle of the weight room. Those isolated racks show that you mean business.

So, with the seniors playing their last game, a few spots were open. Colin Crowe made sure he was there to fill a void. This is a symbol of where Crowe, a member of the Eastern Band of Cherokee Indians, stands with this team, and Smoky Mountain is going to need to be a regular occurrence moving forward. Head Coach Ricky Brindley said that he was impressed by the jump that Crowe made this season.

“His maturity level grew so much. And not from a how he carried himself standpoint, but from a toughness standpoint. He developed a mental and a physical toughness from his freshman to sophomore year that was very obvious, and certainly gained the respect of his teammates and of his coaches,” said Brindley.

In high school football, coaches lose some of their best players every year. That’s just a part of the system. Seniors graduate and the next group steps up. However, what makes Crowe’s situation a little different is that he’s just a sophomore. Not to mention that the shoes he’s looking to fill are that of the Mountain 6 Conference lineman of the year, Clayton Frady.

“We really think we’re better when Colin is on the field, so we’re going to look at him at the right guard,” said Brindley. “We’ve got huge shoes to fill at that particular position.”

The next step isn’t to be a contributor, either. Crowe has already asserted himself as one of the best football players on the team, if not the region. He was listed on the Mountain 6 All-Conference team this past season with his efforts as a defensive lineman. 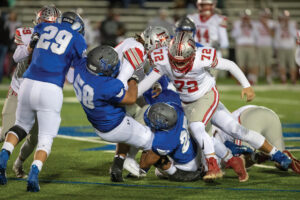 Right now, Crowe has two things to work on to become genuinely irreplaceable on this team.

First, he has to improve his offensive skill set. He was able to focus most of his energy on learning the defensive side of the ball for the 2019 season. Still, Coach Brindley is hoping that Crowe will be able to fill in for Frady at the right guard position as well. Due to the talent that Crowe has, along with the size of the squad, he will be expected to play on both sides of the ball.

“We’ve got to be able to replace him (Frady), and we feel like Colin is capable of stepping in and trying to fill those shoes on the offensive line while also playing snaps defensively. Because we feel like that’s certainly his strength, and we’ve got to have him on that side of the ball. So, he’s going to have to make sure that he’s in great shape.”

The other essential improvement for Crowe will be his leadership. This is not to say that Crowe is a bad teammate or immature, but he’s young. Brindley says that he is already respected by his teammates, but becoming a leader on the team will take a lot of work.

“He showed the initiative from a leadership standpoint, which is huge for him. Because I think that not only continuing to get stronger, but continuing to develop as a leader. Because his classmates, his teammates, I think they respect him. He’s going to have to continue to develop some vocal leadership. He’s a quiet kid, a real quiet kid. But the more vocal he can become, I think the better off we will be as a team,” said Brindley.

Brindley says that one of the things he respects most about Crowe is his work ethic off the field. He says that he keeps in touch with all the teachers in the school, and there have only been compliments when it comes to Colin’s work.

“Colin is humble, quiet, and does not draw attention to himself. He may make the highest grade on a test, project, quiz etc., but he will never boast that he did. If he is asked by his friends in class what he made, he will shyly tell them and turn red when he does. He is also one that will do anything asked of him by his teachers and will help or explain something to another classmate that is struggling,” said Kim Bryson, one of Crowe’s teachers at Smoky Mountain.

Crowe said that he cares deeply about academics because he doesn’t know what the future holds.

“I take pride in knowing that I’m good athletically and academically. That I’m not just one or the other,” said Crowe.

His dream is to play football in college, but he says he wants to be ready for anything. That’s why he has a near-perfect attendance record, save for a sick day.

Bryson says she wants to see Crowe push himself in both academics and athletics. She says he has tremendous potential.

“Colin could be a role model for any age group if he was encouraged to do so.Â  Again, he does not like to draw attention to himself, but I think he would be great with younger kids, once he got out of his comfort area and became involved with them. They would love him and vice versa.”

Taking the next steps on and off the field are a focus for Crowe, but he said that this year he wasn’t even sure how much he was going to play.

“I thought I’d have to fight because we had a pretty good line group already. So, I didn’t think I’d get as much playing time as I did. Last year I hurt my knee, so I didn’t get much playing time then either. I was just working as hard as I could every day.”

While Brindley has intentions on getting Crowe to maximize his potential, he says that he is extremely proud of the sophomore. He said that he knew he could be special from the first moments coaching him.

“He had incredible feet. That’s the first thing that stands out with Colin. He was such a big kid, but he had such great feet. And we knew that once we were able to pack some muscle on him and move him down to the defensive line that he could be a force and a disruptive player for years to come. That’s certainly what he showed this past season. Being named all-conference was a big honor for him.”

All-Conference in your first season on varsity is impressive regardless of the situation. Crowe says that he was at the gym with his cousin when he got the news.

“I was so happy. Because I was hoping to get at least honorable mention. At the beginning of the year I thought ‘maybe I can somehow do this’. But I didn’t think I’d actually be able to do it. I just felt so great, I was so happy.”

Crowe says he has a few goals for the next year. He wants to maintain his All-Conference status, he hopes to push for that lineman of the year recognition, and the final thing Crowe said was that he needs to keep his grades up.

Coach Brindley sees a bright future for Crowe. He says he will have more talks with Colin about what is needed moving forward, but also that he’s confident Colin will already know what he needs to do.

“If it’s third and short and we need a first down, we’ll tell our quarterback if we’re running a quarterback sneak, we’re going behind his big butt. It’s no offense to nobody else, but that’s our guy. And we were very honest with our quarterback this year, we were going to go behind Clayton Frady if we had to do something. And Colin will be that guy.”