They are not the Phoenix anymore. Driving to what used be the Cherokee Phoenix Theatre, one might notice some changes. On the side of the building is an extra-large digital screen. At roadside, the digital sign has been upgraded, larger, with a header identifying the facility as “Cherokee Cinemas & More”. A similar sign has been erected on the building. The Kituwah LLC has taken over management of the theatre. 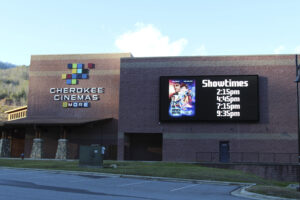 New signage is now up for the Cherokee Cinemas & More. Kituwah LLC took over management of the facility from Phoenix Theatres in December 2019. (ROBERT JUMPER/One Feather photos)

In the December 2019 session of Tribal Council, Kituwah LLC reported on the projects that they have “closed” and the projects that are currently in progress for the upcoming year. The closed list included gaining interest in Ela Campground, RV Park, and Country Store; Parkside Villas in Shelby, N.C.; CIC Technologies, LLC; Haley Communities Partnerships; KWB Hotel Portfolio; GMB Mezzanine Capital; Charles Schwab Passive; and MHPI VII.

According to Mark Hubble, Kituwah LLC executive director, and the Board of Directors, these projects “are profitable”. When asked about what acceptable rate of return for these projects is, Hubble said approximately 8 percent.

One of the slides presented to Tribal Council was titled “2020 Projects in Progress or Due Diligence Phase”. Items on this list include the completion of Federal 8(a) Certification, which would open up additional markets to the LLC and the Eastern Band of Cherokee Indians; investing in a Myrtle Beach Beachfront hotel; the continued revitalization of  the theatre; a “Bridge Loan”; and negotiations regarding several properties. 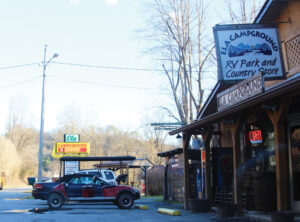 Kituwah LLC is in the process of remodeling the store and other facilities at Ela Campground & RV Park.

Regarding the renovations of the Cherokee Cinemas & More, Hubble said, “Basically, what we have been focusing on is the outside signage. We also did a lot of maintenance on the interior, like they didn’t have spare batteries for the projectors and those kinds of things. We also reran some wires and cables that were frayed.”

The LLC corrected some sound issues as identified by customers. They are realigning the Point of Sale (POS) system to allow for additional ticket kiosks to facilitate swifter checkout for ticketing and a better customer experience.

Hubble also talked about the relationships needed to acquire movies for the theatre. “Some of the things we were worried about in the transition (from Phoenix management to the LLC) was would studios deal with us. All of the studios are sending us their films and all of that. We figured out how to get the studios paid. It is a whole different kind of world to do those.”

One of the short-term goals for concessions is to make more items self-service. This would shorten wait times for tickets and concession items. Wait time is the number one concern of movie goers at the Cherokee Cinemas.

As for the new “& More” moniker, Hubble indicated that a request for proposal will soon be advertised for remodeling the upstairs public area of the theatre. One of the possible uses of that upstairs area, mentioned in the report to Council, was the possibility of an escape room. Escape rooms have become very popular pasttimes in the U.S. The rooms are typically themed mystery or puzzle rooms that require the “guests” to solve the mystery or puzzle in order to gain their freedom, unlock a door, and “escape”.

Humble said that the LLC is now doing some renovation and remodeling of the recently-acquired Ela Campground, RV Park, and Country Store. “The rationale behind the purchase of Ela was that it is a very cashflow positive campground. We can get a good return without even putting any debt on it. That entrance going from Bryson to Cherokee is well-traveled, and we like to do projects that kind of beautify the entrance to Cherokee for the tourists.”

Kituwah LLC Board member Adam West stated that some members of the community have expressed concern over the purchase of Ela, noting a “run down” appearance. He stated, “The return on what we put into that campground is within the 7 to 10 percent per year that is the guideline for return (established by the LLC). Even if it looks (unattractive), it is still making more money that we might make in the stock market for example.”

After some extensive negotiations, the LLC purchased the Ela property and business for $2.525 million (after some condition concessions). The appraised value of the property is $2.7 million and the original asking price was $3.5 million. Both West and Hubble stated that the anticipated cash return on the project is 10 percent.

Ela is one of many property proposals submitted to Kituwah LLC regularly. Hubble says that 95 percent of those must be rejected because they do not project a return high enough to be in consideration by the LLC. So, the projects that Kituwah has invested in seem to be very solid properties as far as appreciation potential and cash return, like the Parkside Villas in the town of Shelby.

On deck is a negotiation for a 230-room beachfront hotel in Myrtle Beach. Hubble says the plan is to take the property from a non-branded to a branded hotel, then after some upgrades, to an “upscale” branded hotel.

Kituwah LLC Board member Chrissy Arch commented, “The location of this property is prime.”

The hotel is located in the Pavilion area of Myrtle Beach.

Having such a large return on investment from adult gaming sometimes creates an unrealistic expectation that businesses should typically produce that kind of return. Most businesses do not. “Tribes chasing a 40 percent return from non-gaming businesses is how rich tribes become poor tribes. So, we are not trying to do that. This Tribe does not need that. What (we) need is very steady alternatives with some job creation,” according to Hubble.

The physical offices of Kituwah LLC have gone through some extensive renovation or upgrade since August 2019. In August, there was no sign of partitioned offices and it was basically one open room. The building has been transformed into a true office building, housing multiple office spaces. Another area of growth is staffing, which has grown from two employees of the LLC back in August to a total of four directly at the Kituwah LLC building. As Humble began to count, he also had to include the employees of the acquired properties, like Cherokee Cinemas, Ela, and the Parkside Villa . “We are at over 20, and as other projects come online, we should approach one hundred sometime this year.”