ON THE SIDELINES: Cherokee Biathlon would be a neat sport for Indian Fair

My wife and I are huge sports fans, and we frequently find ourselves gravitating towards lesser-known sports.  Football is king with us but, to be honest, our second favorite sport will surprise you.  It isn’t basketball, baseball, or soccer.  It is biathlon which is wildly popular in parts of Europe, and I would like to propose a Cherokee version that could be done at the annual Cherokee Indian Fair.

Biathlon is a sport which combines cross-country skiing with shooting.  There are several different types of races, but the main gist of it is that you ski for awhile and then you stop and have to shoot your .22 caliber rifle, which has a five-round clip, at five targets.  The athletes shoot four times per race – twice in a prone position and twice in a standing position.  The targets are 164 feet away and come in two sizes (1.77″ for the prone and 4.52″ for the standing). 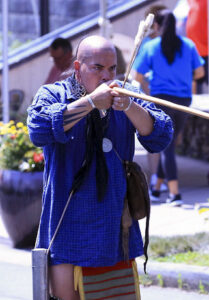 Mike Crowe Jr., a member of the Warriors of Anikituhwa, shoots a blowgun at a past year’s Cherokee Voices Festival at the Museum of the Cherokee Indian. (SCOTT MCKIE B.P./One Feather photo)

It is a grueling sport.  Cross-country skiing is frequently referred to as one of the most physically-demanding sports there is.  But, it is so cool to watch because the races themselves are full of drama and great finishes.  You see, if you miss a target you have to ski a penalty lap which is usually around 150 meters.  Missing one or more targets while your opponent shoots cleanly can really change a race in a matter of seconds.

Last summer, I had the chance to interview Miranda Long Stamper about her fitness regimen and active lifestyle.  She is the five-time winner of the Ironwoman Contest, hosted annually by the Mississippi Band of Choctaw Indians, which combines endurance and strength events in a timed environment to determine a winner.

I think Cherokee Biathlon would be such an event.  Instead of skiing and shooting a rifle participants would run and shoot a blowgun that they carry with them – probably the shorter version.  I think a 1.5- or 2-mile race would be a nice distance with athletes shooting twice from a standing position.  I have seen people shoot a blowgun from a prone position, but it is so uncommon that most people wouldn’t be as accurate and it could throw off the races, at least initially.

So, basically athletes would start running with their blowguns.  They would run a certain distance to the shooting station where they’d pick up their five darts, and they’d shoot those at a target.  Miss and they’d have to do a penalty lap.

The race continues until they do another loop back to the shooting station for shoot number two, and then to the finish.  It’s a pretty easy concept, and I think people would really enjoy participating in something like that.

The Cherokee Indian Fair is a perfect place to launch such a sport, and I just feel it would soon become a crowd favorite.

To see examples of biathlon and to get the basic idea of what I’m talking about, visit the official website of the International Biathlon Union at: https://www.biathlonworld.com.