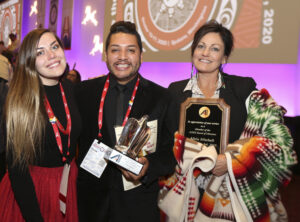 Shown at the recent AISES National Conference in Milwaukee, Wisc. are, left to right, Katherine Jacobs, an EBCI tribal member who serves as the Region 3 Representative for the AISES; Yona Wade, an EBCI tribal member who received the AISES Indigenous Excellence Award; and Alicia Mitchell, a Cherokee Nation citizen, who is the newly positioned senior development officer for AISES. (Photo courtesy of AISES)

During the Annual Conference, the Winds of Change magazine featured the EBCI on their annual list of “25 Native STEM Enterprises To Watch” for the work they are doing to support cultural preservation, language revitalization, and the contributions they continue to make toward programs supporting STEM within the EBCI community.

Principal Chief Richard G. Sneed makes one sentiment clear, “We are proud of all our STEM-related employees.”

In a world where technology continues to expand connections to ancestors, traditions and ceremonies need to stand stronger than ever, and the EBCI is bringing STEM technology to that challenge according to Sneed, “Preserving our culture and traditions is paramount to the future success of our Tribe.”

New Kituwah Academy Science teacher, Jessica Metz, received the distinguished honor of becoming a lifelong member known as Sequoyah Fellows. AISES Sequoyah Fellows are recognized for their commitment to “mission in STEM and to the American Indian community.”

Alicia Mitchell, a Cherokee Nation citizen, who is the newly positioned senior development officer for AISES, states, “Jessica’s passion for the future of the EBCI students through her instruction is astounding, she continues to set the bar and is a role model for other tribal nations as her students are producing science projects in the Cherokee Language. It was truly a privilege and honor to gift her with a Sequoyah medal.”

Katherine Jacobs, an EBCI tribal member and the daughter of Brad Jacobs and Mitchell, has been elected to serve as the Region 3 Representative for the AISES. She is currently studying finance at Arizona State University in Tempe, Ariz. and will be graduating May 11. This appointment gives Jacobs the opportunity to be an ambassador for the EBCI and collaborate with other native students on a national level.

Jacobs attended as the AISES Region 3 Representative saying, “As the Region 3 Student Representative, it is my duty to lead the planning and execution of the regional conference, notify each chapter of crucial information and serve as a liaison for the chapters and Board of Directors. The AISES community is a true family network that provides countless opportunities and support to indigenous people in STEM fields. I aspire to use my networks from AISES to better serve the EBCI community while stimulating our youth to do the same with the aid of education and organizations such as AISES.”

During the Traditional Honors Banquet, the EBCI was named as the recipient of the Tribal Partner Service Award for their gracious contributions and financially investing in the 2019 AISES Leadership Summit.

Mitchell includes, “The EBCI community really came through on this event providing support, professional tribal members conducting leadership sessions and being incredible hosts to our guests.”

The inaugural Indigenous Excellence Award that acknowledges individuals who have done substantial work to advance program and opportunities for Indigenous students and professionals in STEM education and careers was awarded to Yona Wade, an EBCI tribal member who has dedicated 10 years to the development of native youth and supporting the educators at Cherokee Central Schools.

“It is an absolute pleasure to serve my Cherokee people,” said Wade.  “I have yet to have a day where I didn’t want to go to work.  Passion is what drives me.  Passion for my work and passion for my people.”

As Mitchell has transitioned into the role of a staff member for AISES, her prior service did not go unrecognized at the Traditional Honors Banquet. Her years of service and contributions of supporting STEM across Indian Country and within the EBCI community was instrumental in the development of the EBCI being one of the first two tribal chapters, the placement of three EBCI student representatives, and bringing culturally based curriculum programming into the Cherokee Central School system through grants funded by the Cherokee Preservation Foundation.

She is dedicated to this work and feels that her position at AISES allows her to pursue many of her passions including; working for Native people, promoting education, enhancing the tribal workforce, supporting economic development, promoting tribal sovereignty, and increasing diversity in organizations and institutions throughout North America.

The collaboration between the EBCI students and AISES strengthens as they received a grant for a project called, Strengthening Computer Science Curriculum for CCS, from the Cherokee Preservation Foundation. This funding provided students and faculty from Cherokee High School the opportunity to attend the 42nd Annual Conference. Cherokee Central Schools’ staff members, Scott Freeman, Robert Rosener, Ronda Denton, Layno Carla attended along with the following students: Howie Wallace, Brandon Wolfe, Dorian Reed, Toby Johns, Caedance Smith, Phoebe Rattler, Jaden Armachain, and Tehya Littlejohn. The students participated in the interactive STEM activities while the faculty attended training sessions. Attendance to the AISES Annual Conference was made possible through funding from the Cherokee Preservation Foundation and the Eastern Band of Cherokee Indians.

Nominations are currently being accepted for all AISES Professional of the Year Awards who will be honored at the 2020 AISES National Conference on Oct. 15-17 in Spokane, Wash.

Completed online nomination packets are due May 15 at 11:59 p.m. MDT. Incomplete nomination packets will not be accepted.  For more information see: https://forms.aises.org/2020-poy  Want to know more about the AISES professional awards program? Contact Kellie Jewett-Fernandez  kjfernandez@aises.org or (720) 758-9679.