ON THE SIDELINES: Raylen Bark exudes confidence, leadership on and off the court

Some athletes excel in their sport and are leaders on the court or field, and others lead in the athletic world as well as in the classroom and in their community – Raylen Bark falls into the second category.  Bark, a senior at Cherokee High School (CHS) and a member of the Eastern Band of Cherokee Indians, exudes confidence and leadership well beyond her years. 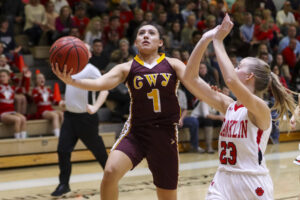 Bark (#1), a senior at Cherokee High School (CHS) and a member of the Eastern Band of Cherokee Indians, exudes confidence and leadership well beyond her years. (SCOTT MCKIE B.P./One Feather photo)

I’ve written several times before about the link between getting good grades and participating in sports, and Raylen proves that point every day.  Last May, she won the Miranda Long Stamper Honorarium Miss Brave award at the CHS Athletic Awards banquet as well as receiving a CHS Academic Award at that banquet.  It is a scenario that has played out many times over during her school years.

She is a multi-sport athlete participating in cross country, track and field, and her favorite, basketball.  I have known Raylen since my daughter and her were in elementary school together, and I’ve covered her entire CHS sports career.  Each time she takes the court or enters a race, she does so calmly and with true positivity.

When I interviewed the Lady Braves varsity basketball team prior to the 2017-18 season, Raylen told me, “We just need to play together, not let drama get in the way, and just really be a team out there and just understand that you can’t play basketball with just one person. It requires a team effort and everyone putting in hard work to reach all of our goals together.”

On the court or at the start of a race, she’s not only a team player, she’s also a coach, a cheerleader, and a friend.  Each basketball game, I see her encouraging others and getting them fired up – all the while remaining calm in the not-always-calm environment that is North Carolina high school basketball.

Knute Rockne, the late legendary Notre Dame football coach, once said, “One man practicing sportsmanship is far better than a hundred teaching it.”

Raylen seems to live by that doctrine.  I cannot ever remember seeing her receive a technical foul.  Sure, she gets fouls just like anyone who plays their sport hard, but I just can’t remember her ever getting a technical for mouthing off or some other unsportsmanlike move.

In addition to her leadership on the court, she leads her fellow students in the classroom.  She is a staple at the annual Tribal Council Awards and Principal Chief Awards honoring academic excellence, and she is sure to finish in the top of the Class of 2020 academically.

Raylen served as the 2017-18 Teen Miss Cherokee and represented the Tribe all over the country.  Each time she spoke, she garnered the attention of the audience and her command of the Cherokee language, which she worked on with the help of her grandfather Goodlow Bark, has always been inspiring.

Her sports career is winding down at CHS, but her life career is just getting going.  Whether she plans to play at the next level or simply attend school and get an education, I know she’ll go into the next chapter of her life with the same fervor that she brings to the basketball court.