Beasley, who is approaching her first full year as Chief Justice, said that she has been very happy to be in Cherokee. 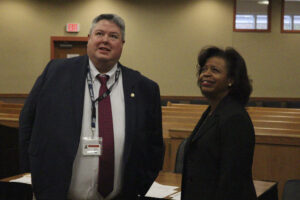 “The nation is really very important. Not just to the people in western North Carolina, but really to the people of North Carolina. The heritage of the Eastern Band of Cherokee Indians is foundational to who we are as Americans and North Carolinians. And so, I think it’s so important that all of us value all that you offer,” said Beasley.

“This is fantastic, I appreciate the Chief Justice,” she said. “I appreciate his time and his willingness to show me around. And to really help me see how efficient and functional the system is here.”

After visiting the court, EBCI (Eastern Band of Cherokee Indians) Attorney General Michael McConnell introduced Beasley to his staff at their offices. Following this, they made their way to the Tribal Council chambers. She spoke to the Tribal Council representatives and Principal Chief Richard G. Sneed. 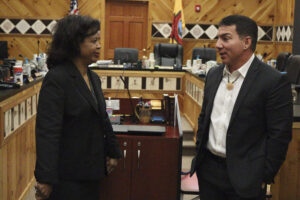 This visit was set up by Judge Bradley Letts, and Beasley said that she was very happy it was worked into the schedule.

“I appreciate all the ways that we, in the North Carolina jurisdiction, can partner with the Cherokee nation, and be of assistance in whatever way. We are sibling jurisdictions and it makes sense that if there are ways that we can be of assistance we certainly want to do that. And also, if there are ways that we can make sure that how we carry out our laws are fair and proportionate to members of the nation. We’re certainly mindful of that.”

She said that visiting and meeting the people in Cherokee has been important for getting a grasp of the area.

“I think there’s no way that we can really be effective in our assistance and understanding of what the needs are of the Cherokee nation unless we understand more about the nation. The language and the people. The concerns and the cares.”

Although the EBCI Court is in its own jurisdiction separate from the state courts, Beasley said that she still hopes to have regular communications with the EBCI systems during her time as North Carolina Chief Justice. She says that she wants to work with individual initiatives if possible – specifically those that will combat the current problems with substance abuse.

“I certainly hope so. I know we’re very concerned about the opioid crisis. Not just here on the boundary, but everywhere. There’s a crisis for opioids, but we’ve been in crisis for quite some time. Around substance and misuse issues here in North Carolina.”

Beasley says that in her time touring the state, she has seen a lot of good to go along with things that need improvement.

“What I’ve also learned is that we have issues. We have a lack of real technology. We’re still using DOS systems. And so, in order to be efficient and to make sure we’re really meeting the needs of the people that we serve, we have to be better technologically.”

She says that while the state often fights financial restrictions, that’s not the only issue. Beasley said that is true for Cherokee as well.

“It’s crucial to figure out how best to address the needs of a really unique population in North Carolina. And to make sure that while money is important, resources are important as well, understanding of language and culture is also important. So, providing resources that can’t be responsive to the total needs of people that are being served can be regressive.”

Beasley continued by saying that each area is different, but Cherokee is especially unique.

“It is unique. It is its own system, which is unique to North Carolina. We have a comprehensive system of 100 counties across the state, so the system itself is unique. I think the beauty of the system is that because it is a system in it of itself, and it has its own jurisdiction, that there’s a greater opportunity to reach people. And to really change folks and make a difference.”