Aproject to construct a Senior Continuing Care Retirement Community, to better serve the elders of the Eastern Band of Cherokee Indians (EBCI), is moving along.  During the monthly Health Board meeting on Wednesday, Jan. 15, officials from the Cherokee Indian Hospital discussed the project briefly and related they will make an official proposal next month. 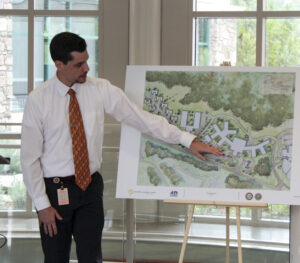 “It’s a really, really large project,” Damon Lambert, Cherokee Indian Hospital director of engineering, told Health Board on Wednesday.  “We can break them up into segments.  We don’t have to do all of them at the same time.”

He noted that the project is being built on the Long Blanket Tract which sits adjacent to the Cherokee Indian Hospital.  The configuration of the different components on the site will be one of things discussed as the proposals are brought forth next month.  “We did try to consolidate the proposal to the smallest footprint that we could.”

Those are all things that will be discussed in February.

Following passage of that legislation, a public meeting was held several weeks later at the Cherokee Indian Hospital to garner ideas and comments from the community regarding the project.

At that meeting, Principal Chief Richard G. Sneed commented, “I think one of the ways that we demonstrate our true character as a people is how we care for those who are most vulnerable – for our children and for our elders.”