Principal Chief Richard G. Sneed announced plans on Tuesday, Jan. 7 for the Eastern Band of Cherokee Indians (EBCI) to develop a casino as part of development on a 350-acre tract in southwestern Virginia.  Steve Johnson, developer of the tract known as The Pinnacle, has entered into an agreement with the Tribe.

“Right now, it’s just a simple agreement,” Chief Sneed told the One Feather in an interview on Wednesday, Jan. 8.  “We’re not bound by anything.  All the agreement says is that we’re going to work together to try to win a gaming license.  If we are successful in that, we will place a casino resort on the property at The Pinnacle.” 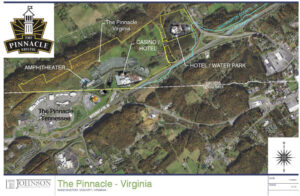 He described the process, “There is a bill (Virginia Senate Bill No. 743) moving through the Virginia legislature right now for commercial gaming.  In the initial draft of the bill, they had designated certain cities.  They wanted to put casinos in cities that were economically-challenged or economically-depressed – in need of a shot in the arm.”

Chief Sneed said language in that bill is being challenged, “It came back with a recommendation that rather than having it be designed to certain cities, that they use a competitive bid process for licenses.  States that have the most success, the highest revenue, are those that have used a competitive bid process.  So, you end up with those entities that are going to provide the best product in the marketplace.”

Since the casino would not be on tribal trust land, the planning and processes are different from the two casinos currently operated by the Tribe – Harrah’s Cherokee Casino Resort in Cherokee and the Harrah’s Cherokee Valley River Caisno & Hotel in Murphy.

Chief Sneed said the deal is very new and is at the beginning of the process.  “Everything is literally in its infancy right now.  There’s a lot of work to be done.  We don’t even know if we will be successful in getting the language of the bill changed to make it county-wide instead of just the City of Bristol.  We can’t just sit on our hands and do nothing.  Here’s an opportunity to participate in commercial gaming just two-and-a-half hours from home.”

Johnson said in a statement on Tuesday, “Our agreement with Chief Sneed of the EBCI is an extraordinary opportunity to bring an experienced casino owner-operator to Washington County and the southwest Virginia region.  We look forward to working with the Cherokee Nation, local leaders, and elected officials in Richmond (Va.) to bring this massive opportunity to fruition.”

Tribal Council passed Res. No. 101 (2020) during its regular session on Thursday, Jan. 9.  The legislation, submitted by Chief Sneed and Vice Chief Alan B. Ensley, states, “It is time for the tribal government to begin a serious approach towards new major revenue streams.  The attitude towards commercial gaming is rapidly changing which will eventually have a direct impact on our casinos and generated revenues.  Multiple tribes across the nation are expressing their interest and are working to invest in commercial gaming to diversify their economies and generate higher revenue.”

The legislation originally called for a comprehensive study be done “regarding the EBCI entering the commercial gaming market”, but Vice Chairman David Wolfe made the motion, which was approved, to amend the resolution to read “comprehensive strategy” as he said it’s time to move forward on this opportunity.

In addition to the proposed casino, other proposed additions to the development include a large outdoor concert venue, a mountain coaster, and a 150-room hotel with an indoor water park attached.  “We think it’s a win for the county and for the State of Virginia, and we’re excited for the opportunity to participate,” said Chief Sneed.

He also noted that the area is historic Cherokee territory.  “Interestingly enough, Washington County, where Bristol, Va. is, was historic aboriginal territory of the Cherokees.  So, we fit the bill there as well.  We don’t reside there anymore, but our ancestors resided in what is now the current Washington County.”

The next steps in the process involve waiting on legislative issues.  Chief Sneed noted, “We’ve got to work with the legislators to get the language changed…their study is telling them to have a competitive process and not just go with handing out licenses to pre-determined winners.”

Not everyone in the area is happy with the announcement.

“As everyone here knows, last spring the (Virginia) General Assembly passed, and the governor signed, legislation that approved casino gaming in certain localities across the Commonwealth of Virginia – which the legislation has to be approved again this year in Richmond,” Randy Eads, Bristol, Va. city manager, said during a press conference on Jan. 7.  “Senate Bill 1126 authorized the Joint Legislative Audit and Review Commission to study and report their findings to the General Assembly.  JLAR studied each locality it was assigned in the legislation and the effect gaming would have on those localities.  The study indicates each locality, and specifically Bristol (Va.), that a resort casino would be viable in Bristol, provide over 1,000 direct jobs, and pump millions of dollars into Bristol’s general fund.”

He added, “With today’s announcement, the fact that Mr. Johnson wants to come into the game at such a late stage could have a detrimental impact on the legislation – not only for Bristol, but for the entire Commonwealth of Virginia.  As previously stated, the legislature has already agreed that the City of Bristol, Va. would have the opportunity to have a resort casino within its boundaries.  The development of another casino within one mile of the Bristol Mall has not been authorized by the General Assembly or studied by JLAR.”

Chief Sneed said if the legislative changes come to fruition, the public will be informed as the process goes forward.  “I applaud Tribal Council’s leadership on this for recognizing that we’ve got to engage.  And, then as each hurdle is overcome, there will be resolutions brought to Council to get direction for the next step.”