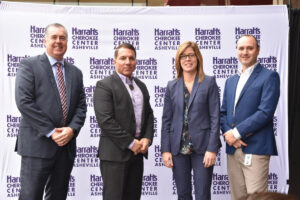 The venue has also recently hosted the Federation Cup in back-to-back years, a first in over 30 years on U.S. soil for the international tournament, as well as blockbuster performances from internationally renowned musicians like David Byrne, The Lumineers, Kacey Musgraves, Bob Dylan, and Luke Combs and comedians including Kevin Hart, Dave Chappelle, and Jerry Seinfeld. More event and venue information available at HarrahsCherokeeCenterAsheville.com.

“The City of Asheville is looking forward to growing our relationship with the Eastern Band of Cherokee Indians through the naming rights of our entertainment facility,” said Mayor Esther Manheimer. “We appreciate the investment they are making in downtown Asheville and the Western Carolina Region.”

Harrah’s Cherokee Center – Asheville is the design of an up to 10-year, $5.75 million license agreement between Harrah’s Cherokee and the City of Asheville. The partnership, approved by city officials in May 2019, includes an additional first year payment of $750,000, two-thirds of which will be funded by the Eastern Band of Cherokee Indians. This initial investment is earmarked to improve the fan experience with dedicated venue upgrades including the installation of state-of-the-art video display boards in the ExploreAsheville.com Arena, expanded public Wi-Fi throughout the complex, and additional comfort and experience related amenities. The entertainment complex has experienced increased year-over-year growth from 2014 to 2019, including a rise in both calendared events and attendance.

“Harrah’s Cherokee and the Eastern Band of Cherokee Indians have always been proud supporters of music, arts, and community initiatives in Western North Carolina. Partnering with Harrah’s Cherokee, a name synonymous with entertainment, will launch Asheville’s original music, sports and events complex into a new decade,” said Chris Corl, General Manager of Harrah’s Cherokee Center – Asheville. “We look forward to the opportunity to help enhance the relationship between our two mountain communities.”

“For the residents and visitors of western North Carolina, this venue holds a very special place in their memories,” reflects Brooks Robinson, senior vice president and general manager Harrah’s Cherokee Casino. “This is a piece of Asheville’s diverse and vibrant entertainment scene that we are very proud to be a part of. We look forward to the continued success of this venue as Harrah’s Cherokee Center – Asheville.”

* April 11 – The Revivalists: Into the Stars Tour