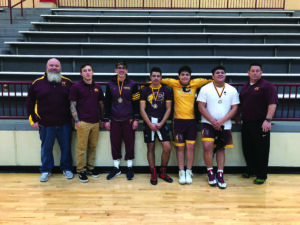 The Braves stood strong in the event with Braden Taylor and Masih Catolster placing first at the 160lb and heavyweight divisions, respectively. Kaden Pheasant also placed second at 170lb and Ian Crowe placed fourth at 220lb.

“We faced a couple of out-of-state schools, Pigeon Forge are a former state champion, a couple 2A schools thrown in,” said Mike Winchester, CHS head wrestling coach.  “So, for the competition we faced we did really well.”

However, this was more than an early season test for Cherokee. This tournament means a lot more to the people who run this event. T-shirts are made for the event that has been ongoing since 1978. The family of the late Chief Saunooke still makes sure to show their appreciation at the event as well. Robert Saunooke, the grandson of Chief Saunooke, was in attendance and presented trophies to the winning wrestlers.

“It’s an incredible honor and respect for my grandfather”, said Robert Saunooke.

“A lot of people don’t realize that Chief Osley brought the first manufacturers, he’s the one that started the tribal levy and told the state we weren’t going to pay them taxes. He did a lot in the early beginnings of our Tribe to give us financial resources and independence. He was already nationally known because he was a wrestler, so that got him into a lot of the political arenas a lot easier.” 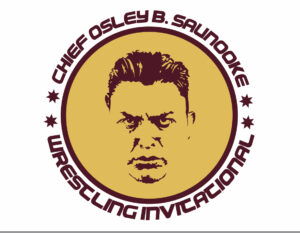 Chief Osley B.Saunooke, who served as Principal Chief of the Eastern Band of Cherokee Indians from 1951-55 and 1959-63, was a world heavyweight wrestling champion. He earned his title in 1937 and held it for 14 years. That’s why the name attached to this tournament works so well.

Robert Saunooke also said that the family usually sponsors the tournament as well, and plans to continue the tradition moving forward.

Coach Winchester, who has returned for his second stint with the program, said that he appreciates the history of the tournament and what it means to the community.

“I was talking to his grandson during the break. We were kind of comparing notes. He was wrestler, I was a wrestler…that’s my most favorite thing, to be able to share those experiences with those guys that have wrestled through the years and your memories of the tournament, and how important it is to everybody in and around Cherokee.”

Winchester says that because he came in as coach so late there were things he was unable to do for the tournament this year, but he is looking forward to growing the name and brand of the event. He made a point of adding features to it when he was with Cherokee from 1993-2003.

“We’re going to continue and do more things. The things in the future that I look forward to doing, I have a little biography of Chief Saunooke that I will publish with the tournament brackets and hand out to each of the coaches, so that they’ll get to learn a little bit. That’s one of the things that I did in the past when I was at Cherokee.”

Winchester says that he loves the growth of the tournament, but also there is a lot that goes into the preparation and function of the event.

“I would like to say a big thanks to everyone that was involved. From council members, former council members, all the parents that were involved, the table workers…our kids that worked for us, the concessions, the hospitality room, the administration at Cherokee. This is a total effort by everybody. I don’t run the thing. Everybody pulls together to make this happen, it is a full community effort,” said Winchester.

“Many people know the name of Osley Saunooke, but this tournament is here to make sure people understand what the name means. By not only giving the event a title but sharing stories as well, the history continues.”

“So, keeping that connection to our past by having a tournament that is named after somebody who was a real big part of that past, I think it honors him but more importantly it keeps our kids and people connected to our history.”