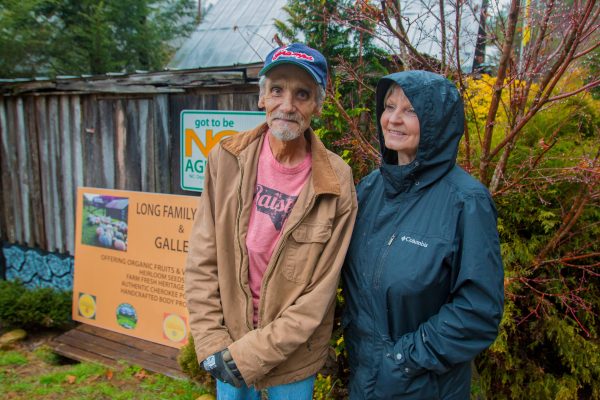 Harold and Nancy Long, the owners of Long Family Farms and Gallery in Murphy, are the 2019 North Carolina Small Farmers of the Year. (Photo by James F. Parker/North Carolina A&T)

Harold and Nancy Long, the owners of Long Family Farms and Gallery in Murphy, are the 2019 North Carolina Small Farmers of the Year.  Harold is a member of the Eastern Band of Cherokee Indians.

The Longs, who grow heirloom vegetables and tend heritage breeds of livestock on their diversified mountain farm, were honored by Cooperative Extension at North Carolina Agricultural and Technical State University during Small Farms Week ceremonies March 27 on the campus.

The Longs appreciate the independent lifestyle offered by farming. “It’s really a freer lifestyle, because you make your choices and then you reap what you sow,” Nancy said. “There’s nobody over you. You make your own decisions.”

The Longs set an inspiring example for other farmers and for young people, said Chumper Walker, director of the N.C. Cooperative Extension Center for the Eastern Band of Cherokee Indians.

“What the Longs have done, they’re preserving and promoting farming,” Walker said. “They’re showing that you can still make a living doing these things. We hope that younger generations will see farming as a way to make a living.”

In addition to growing and selling heirloom vegetables, the Longs save seeds and assemble garden kits, which are sold to the Eastern Band of Cherokee Indians and distributed to members of the tribe to help preserve traditional varieties and improve access to fresh produce.

The Longs credit Cooperative Extension for being a dependable source of reliable information to help them be successful. “Working with Extension is like working with family,” Nancy says. “They’re always there to help answer questions.”

Two other small farmers were recognized Wednesday as Small Farmer of the Year finalists: Phyllis Kessling, the owner of Dabhar Farm in Monroe; and Justin and Holly Miller, the owners of Cherry Hill Farm in Advance.

Small Farms Week recognizes the small-scale producers of North Carolina. The Longs were presented with a plaque, monogrammed jackets and $1,500 during Wednesday’s Small Farmers’ Appreciation Day program, which was the culmination of the 33rd annual observance of Small Farms Week. Workshops, farm tours, demonstrations and panel discussions were also part of the week’s events.