COMMENTARY: Medal of Honor for Sgt. Burgess is long overdue

Fifty years ago, on April 18, 1969, a Cherokee hero gave his life in the service of his country.  The late Sgt. John Decator Burgess, a proud member of the Eastern Band of Cherokee Indians (EBCI), was killed in action while on a combat mission with the 9th Infantry Division in the Quang Tri Province in Vietnam.

For his heroism in combat in the months leading up to his death, he was presented posthumously with three medals including a Bronze Star citation, an additional Bronze Star with Oak Leaf Cluster, and a Silver Star with First Oak Leaf Cluster for gallantry in action.  The Eastern Band of Cherokee Indians already has one Medal of Honor recipient, Charles George, and it’s time for Sgt. Burgess to join that elite group.

Sgt. Burgess’ Silver Star citation states, “Sergeant Burgess distinguished himself by exceptionally valorous actions during the period 28 February 1969 to 1 March 1969 while serving as an Armored Vehicle Commander with Troop C, 3rd Squadron, 5th Cavalry Regiment, 9th Infantry Division, on a combat mission in Quang Tri Province.  Upon arriving in an area where friendly forces were heavily engaged with a large enemy element, Sergeant Burgess directed his vehicle into the midst of the hostile emplacements and played a vital role in routing the enemy.  Later, when the vehicle immediately to his front was hit by a rocket propelled grenade, injuring several of the passengers, he moved his own vehicle into the line of fire and provided cover as the wounded men were evacuated.” 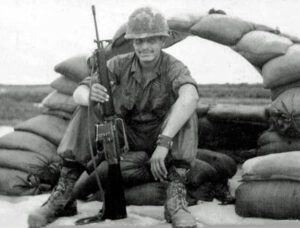 Sgt. John Burgess, an EBCI tribal member, was killed in action (KIA) on April 18, 1969 and was awarded the Silver Star for his gallantry on the battlefield. Tribal officials, joining with Congressman Mark Meadows, are pushing for his actions to be elevated to Medal of Honor status. (Photo courtesy of Vietnam Veteran’s Memorial Fund)

Just over a month after this incredible act of heroism, Sgt. Burgess was killed in action.

Currently, EBCI tribal leaders and Congressman Mark Meadows (R-N.C.) are working to have Sgt. Burgess’ Silver Star upgraded to the Medal of Honor, the nation’s highest military decoration.  In December, the One Feather reported that Tribal Council passed Res. No. 443 (2018), submitted by Yellowhill Rep. Tom Wahnetah, which calls for the Tribe and Congressman Meadows to petition for posthumous decoration of the Medal of Honor for Sgt. Burgess.

There is an award between the Silver Star and the Medal of Honor.  The Distinguished Service Cross, the nation’s second highest military decoration, is given for “extraordinary heroism” according to the U.S. Department of Defense.  The Medal of Honor is given to those “who distinguish themselves through conspicuous gallantry and intrepidity at the risk of life above and beyond the call of duty”.

I would say that moving your vehicle into the direct line of fire to protect other soldiers not only demonstrates a huge risk of life but is also way beyond the call of duty.

Upgrading a Silver Star to a Medal of Honor is not very common, but it does happen.  Army Times reported such an event in October 2018 when former Staff Sgt. Ronald Shurer II had his upgraded as a result of his heroic actions as a medic with the 3rd Special Forces Group in Afghanistan in 2008.  His was one of over 1,000 awards that the Department of Defense has been reviewing since Sept. 11, 2001 to see if they deserve a higher award.

Even though his actions were decades prior, Sgt. Burgess’ record should be amongst those reviewed.

Doug Hallas, who served with him, wrote a moving memorial to Sgt. Burgess that states, “In Nam, we respectfully called him ‘Chief’.  Sgt. John Burgess was admired and respected by everyone who came to know him…his abilities as a soldier were second to none.  His gentle and likeable nature was something that made Chief the sort of person you will never forget, and I will never forget you brother!”

He went on to state, “Your fearlessness and fearsomeness was a badge of pride and honor that all soldiers could identify with.  It was truly a mark left on my life as well as so many others…”