(Note: The One Feather requested from USET a full slate of candidates who sought office as well as the vote tally for each race, but this information was not received by press time.) 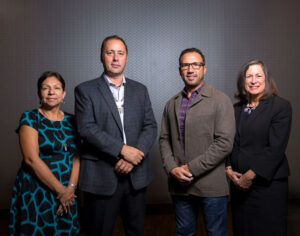 “As President, I have a deep responsibility to each of your Nations,” said Francis.  “Along with the Executive Committee and staff of USET, I will fight for you!”

Principal Chief Richard G. Sneed ran for the office of USET president.  “Over the course of the past year there have been some very concerning situations that have arisen including land-into-trust issues, inadequate funding to fulfill Indian Health Service and BIA trust responsibilities, Centers for Medicare & Medicaid Service work requirements for tribal citizens, and multiple court cases threatening tribal sovereignty.  I ran for President for USET with the goal of being very deliberate and proactive to protect Tribal Sovereignty.  I am confident that Chief Kirk Francis will work with all tribes as USET President, and look forward to working closely with this organization in the coming months.”

During the meeting, issues facing Indian Country were discussed, including the constitutional challenges of Tribal Nation – U.S. relations and related trust/treaty obligations. Additionally, discussion was held on the effort to foster cultural, social and policy change by empowering Native Americans to counter the dominant narratives, discrimination, and invisibility that limit Native opportunity, access to justice, and self-determination.

In regard to these issues, Francis stated, “Many of our USET Nations continue to fight the attacks on their homelands, and on our sovereign rights to protect our communities, families, and especially our children.  I am sickened by federal court decisions suggesting that Tribal Nations are not entitled to a land base and holding the Indian Child Welfare Act unconstitutional.  But, I am energized and determined to continue to fight against these attacks on our sovereignty!”

Francis concluded, “Working together, we will find solutions to these problems, and we will make sure that we are heard!”

– USET release, One Feather staff contributed to this report