COMMENTARY: Janna Girty should be praised for bravery

While covering the Junior Miss Cherokee pageant during the 106th Cherokee Indian Fair, I witnessed a young lady display exemplary bravery and conquer a fear millions like her, including myself, have – public speaking due to stuttering.  Janna Girty, a member of the Wolf Clan from the Birdtown Community, wore a jacket emblazoned with syllabary charters during her introduction.  She told the crowd she wore it to honor those, including herself, who have gone through speech therapy.

“I was so embarrassed,” she noted. “I didn’t want to read out loud or talk in front of a class or pronounce my last name.  After I spent two years working with my speech pathologist Allie, I strengthened and retrained my tongue.”

The Stuttering Foundation defines the condition, “Stuttering is a communication disorder in which the flow of speech is broken by repetitions, prolongations, or abnormal stoppages of sounds in syllables.  There may also be unusual facial and body movements associated with the effort to speak.”

According to the Foundation, there are over 70 million people worldwide and 3 million in the United States who stutter. 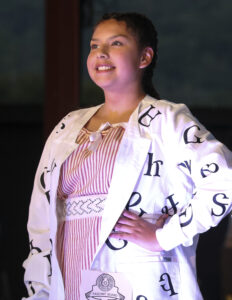 MESSAGE: Janna Girty speaks bravely about her struggle and work to overcome stuttering during the introduction phase of the Junior Miss Cherokee pageant on Thursday, Oct. 4. (SCOTT MCKIE B.P./One Feather)

Girty said she had a problem with her “R” sounds.  My main issue has always been “S” sounds, but sometimes it is just all words.  It takes great courage for any of the young ladies vying for royalty titles to put themselves out there on a stage like they do, but I was in awe of Girty when I found out she stuttered.  I’m not sure I could do that today to be honest.

One of the most recognizable voices in the world – that of Darth Vader and the voice of CNN – stuttered as a youth.  “Stuttering is painful,” actor James Earl Jones once said.  “In Sunday school, I’d try to read my lessons, and the children behind me were falling on the floor with laughter.”

Most of you that know me who are reading this are probably quite surprised as my stuttering has improved dramatically in the last five years, but it was really bad at other points in my life.  As a child and teen, there were times when, just like Jones, reading aloud was a nightmare.  It wasn’t that I didn’t know how to pronounce the words – I was reading at a college level by the time I was in the sixth grade.  I just couldn’t get the words to come out.

One thing I want to make very, very clear.  Stuttering has nothing to do with intelligence.  Sometimes, people think that those of us who stutter are “dumb” or “stupid”, but that is not the case at all.  According to the Stuttering Foundation, actress Emily Blunt, former Vice President Joseph Biden, singer Carly Simon, King George VI, former 20/20 co-anchor John Stossel, and many others are stutterers.

The late country singer Mel Tillis is a very famous stutterer and even played it up.  He wasn’t ashamed of his stutter which is awesome – there’s nothing to be ashamed of.  He named his airplane Stutter One and titled his autobiography “Stutterin’ Boy” in which he wrote, “After a lot of years and more hurting than I like to remember, I can talk about it lightly – which eases things a bit.  It’s a way of showing people that it hasn’t licked me, and so it doesn’t have to lick others.”

Tillis sang without a stutter.

I stutter a lot less than I used to, but even when it was at its worst and stuttering was an all-day affair, I could still sing pow wow songs with no problems at all.  And, I was singing complicated songs full of Lakota words – some call them tongue-twisters – with no issues.  How was that possible?  I have no idea.

One person, quite rudely I might add, once asked me, “How can you sing those old songs but you can’t speak?”

I’m not sure.  Mel Tillis didn’t know either.

Speaking of old songs, while I was watching the pageants at the Fair, an old song entered my head – a pow wow princess honoring song whose Lakota words translate as “when they are holding a beauty pageant, come dancing with happiness, come to the center and dance”.

Girty wasn’t dancing that night, but she certainly came with happiness.  I wish her the best of luck for all of her endeavors, including overcoming stuttering, that she faces in the future.  With bravery like I witnessed that night, I’m sure she will be fine.

I’ll leave you with one final thought.  If you come across someone with a stutter, please, please be patient with them.  They aren’t doing it on purpose, and having compassion and giving them time to get their message across will mean the world to them.