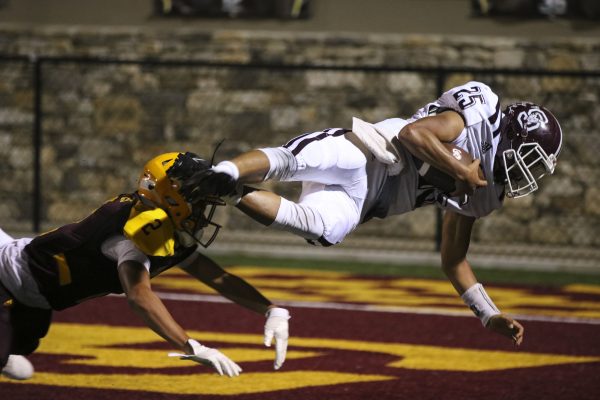 FLYING: Damian Lossiah (#25), Maroon Devils sophomore running back, goes full Superman as he dives into the end zone just in front of Cherokee’s Michael Bernhisel on a two-point conversion play in the second half of a game on Friday, Sept. 28 at Ray Kinsland Stadium. (SCOTT MCKIE B.P./One Feather photos)

What started out as a close defensive-driven game, ended up with 71 points being scored and the teams combining for over 780 yards of total offense.  Swain Co. (3-3) had a big second half to lift them 43-28 over Cherokee (3-3) on the perfect fall evening of Friday, Sept. 28 at Ray Kinsland Stadium.

Cherokee went into the locker room at halftime with a 14-13 lead, but the Maroon Devils came out and scored three straight touchdowns in the second half to propel them over the Braves.

The Braves, who had 362 yards of total offense, were led by Bobby Crowe, junior quarterback, who completed 8 of 16 passes for 242 yards, 2 touchdowns, and 1 interception.  Cade Mintz, junior wide receiver, was his favorite target on the night with 4 catches for 127 yards and 1 touchdown followed by Blake Smith, senior wide receiver, with 3 receptions for 94 yards and 1 touchdown.  Cherokee’s running game struggled on the night with 29 yards.

Swain Co. ended with 424 total offensive yards and were led by Bryce Sain, sophomore running back, who carried the ball 17 times for 217 yards and 2 touchdowns.  Damian Lossiah, sophomore quarterback, rushed 28 times for 120 yards and 3 touchdowns and he completed 2 of 3 passes for 67 yards and 1 touchdown.

The game started with both teams having a three-and-out.  Cherokee started their next possession at the Swain 45-yard line.  Crowe hit Mintz on a 52-yard pass to take it inside the 10-yard line and several plays later Mintz ran for a 7-yard score.  Rocky Peebles added the extra point and Cherokee led 7-0 midway through the first. 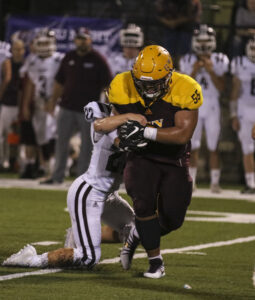 HEADS UP: Cherokee’s Joaquin Layno (#55) runs after picking up a Swain County fumble in the first quarter as Bryce Sain goes for the tackle.

Swain Co. wasted no time answering as Lossiah connected with Hunter Call, senior wide receiver, on a 67-yard touchdown pass.  Call added the point-after and the game was tied up at 7-7.

Two plays later, Cherokee was back on the board as Crowe hit Smith on a 71-yard touchdown pass down the left sideline to put the Braves back on top.  Peebles hit the point-after and Cherokee led 14-7 with just under four minutes left in the quarter.

Several possessions by both teams later, Swain drove deep into Cherokee territory and Lossiah ran in for a 2-yard touchdown.  The point-after failed and the Braves led 14-13 which is how the half would end as Swain missed a field goal later in the second.

The third quarter was all Maroon Devils as Sain scored on two touchdown runs (14, 80) to put Swain up 27-14 going into the fourth quarter.

At the beginning of the fourth, Lossiah scored his second touchdown of the night with a 1-yard run.  Lossiah threw to Jesse Waldroup, senior, for the two-point conversion to make it 35-14.

On the first play of Cherokee’s next possession, Crowe hit Mintz on a 64-yard touchdown pass.  The point-after kick was blocked and Cherokee trailed 35-20 with 6:44 left in the game.

Both teams would score once more in the game as Lossiah ran for an 8-yard score for Swain at the 3:54 mark and then Alex Ben, Braves senior quarterback, connected with Michael Bernhisel, senior wide receiver, on a 40-yard touchdown.  Both teams converted their two-point tries and the game ended with Swain on top 43-28.

Swain was led defensively by Charlie Lambert with 7 tackles followed by Hunter Burrell, Jacob Langston, and Daniel Ammons with 4 each.  Defensive statistics were not available for Cherokee.  Isaiah Evans, Braves senior, had an interception at the end of the first half and Joaquin Layno, senior, had a fumble recovery in the first quarter.