The Museum of the Cherokee Indian will offer a free concert celebrating the fiddle tunes of Manco Sneed, an EBCI tribal member, at 2pm on Sunday, Oct. 7 in the Multipurpose Room of the Ken Blankenship Education wing.  The concert is sponsored by the North Carolina Arts Council and the Museum. 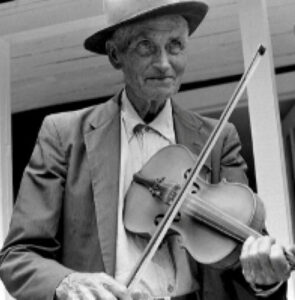 Manco Sneed lived on the Qualla Boundary from about 1900 through the 1970s and developed a fiddle style that influenced musicians in western North Carolina and is now known throughout the United States as an important part of Appalachian string band music.  He and his brothers Osco, Peco, and Cameo were all musicians.  He was part of a Cherokee fiddle tradition that began in the 1700s and continues today.

Manco Sneed’s tunes will be played by Jake Blount and Tatiana Hargreaves, and by Wayne and Margaret Martin.  Brett Riggs will also be sharing clawhammer-style banjo.  Jake Blount is a fiddler, banjo player and ethnomusicologist who has studied the influence of Cherokee and African-American traditions on Appalachian Fiddling.  Tatiana Hargreaves is a wwell-known fiddler and scholar.  Wayne Martin directs the North Carolina Arts Council and is an old-time fiddler who learned from his great-grandfather.  His wife Margaret accompanies him on guitar and banjo and is a citizen of Cherokee Nation.  Brett Riggs has won awards for old-time music and is Distinguished Sequoyah Professor at Western Carolina University.

Jake Blount is a fiddler, banjo player and scholar based in Ithaca, New York.  He has studied with modern masters of old-time music, including Bruce Molsky, Judy Hyman (of the Horse Flies), and Rhiannon Giddens and Hubby Jenkins (of the Carolina Chocolate Drops).  He centers and venerates his racial and ethnic heritage through his approach to music and its history. In 2016, Blount became the first Black person to make the finals at the prestigious Appalachian String Band Music Festival in Clifftop, WV, and the first to win in the traditional band category.  In the following year, he received his B.A. in Ethnomusicology from Hamilton College and released his debut EP, “Reparations,” with award-winning fiddler Tatiana Hargreaves. He has since shared his music and research at the Smithsonian Institution, the Museum of Fine Arts in Boston, MA and numerous other museums, colleges and universities.  He recently released a CD and toured Scandinavia with the Moose Whisperers, a decorated old-time string band. Learn more about Jake at https://www.jakeblount.com.

Over the past eight years, Tatiana Hargreaves has been on the forefront of an up and coming generation of old time, bluegrass and new acoustic musicians. Since releasing her first solo album “Started Out To Ramble” in 2009, Tatiana has toured with musicians such as Dave Rawlings, Gillian Welch, Laurie Lewis, Darol Anger, and Bruce Molsky. From being the second woman to place first at the Clifftop Appalachian Fiddle Contest, to her bluegrass fiddling on Laurie Lewis’ GRAMMY-nominated album The Hazel And Alice Sessions, Hargreaves shows a musical fluency that flows between old time and bluegrass worlds with ease. Tatiana dedicates herself to learning about the history and culture of music while simultaneously seeking her own voice and exploring new ways of approaching these styles. This comes across in her educating and performing, engaging the audience with the very questions she contemplates about tradition, innovation, and positionality. Learn more about Tatiana at https://www.tatianahargreaves.com.

Jake Blount and Tatiana Hargreaves began their musical partnership with an exchange of rare field recordings in January 2017.  Fueled by a joint ambition to shed light on the sounds Black and Native American people have contributed to America’s musical canon, the two began to collaborate with increasing frequency; first assisting each other on their respective theses in Ethnomusicology, then on Blount’s debut release, Reparations.  In the fall of 2017, the two took their project on the road, blending music and storytelling for audiences up and down the East Coast. They’ve performed at numerous museums and universities, and opened several shows for GRAMMY-winner and MacArthur “Genius Grant” recipient Rhiannon Giddens. Blount and Hargreaves have become known for their technical skill, their deep understanding of history, and their respectful, yet innovative presentation of traditional music.  The Rapidian described an opening performance as follows: “Jake Blount and Tatiana Hargreaves led out the show with an unusual, but highly entertaining 30-minute set that incorporated the stories and music of Black and Native American people. Blount and Hargreaves, who started their collaboration in 2017, did not disappoint the audience. With unique songs drawn from early Black performers from the 1920’s and with incredible fiddle and banjo playing, they had the audience spellbound throughout their short set.”

Blount is a member of the award-winning old time stringband The Moose Whisperers.  He became the first Black person to make the finals of the prestigious Appalachian String Band Festival in Clifftop, WV, and the first to win, when The Moose Whisperers took first place in the 2016 Traditional Band Contest.  Hargreaves became the second woman to claim first prize in fiddle at the same competition in 2009. She has since toured with musicians such as Dave Rawlings, Gillian Welch, Laurie Lewis, Darol Anger, and Bruce Molsky, and played on Laurie Lewis’ GRAMMY-nominated album The Hazel And Alice Sessions.

The concert is also a kick-off for The Traditional Arts Program for Students (TAPS), which will offer free classes at the Cherokee Youth Center beginning October 10.  Classes in fiddle, guitar, banjo, and traditional dance will be offered once a week on Wednesday afternoons at 3:30 throughout the school year.  Space is available for about twenty students, from 3rd to 12th grade, no more than ten students per class. Adults are welcome if their children are in the program.  Instruments will be loaned to participants for a deposit of $25, or they can bring their own.

To sign up, contact Carmaleta Monteith and fill out a registration form. Her email is carmaleta@msn.com.  Her phone is 828-497-2717.  This program is funded and supported by the North Carolina Arts Council, the Museum of the Cherokee Indian, and the Cherokee Youth Center.