It was sure enough an unconventional way to catch a fugitive. Tanner Moren Eagle Larch, 27, of Cherokee, was wanted by the U.S. Marshals. Local law enforcement officials recognized him at a high school football game in Sylva between Cherokee and Smoky Mountain on Friday, Sept. 14. However, it was a Cherokee High School former basketball standout who was one of the difference makers in his apprehension.

Justus Day, a Mississippi Choctaw who graduated from Cherokee High School’s Class of 2018, was attending the rivalry football game with Smoky Mountain. Day left at halftime with friends when they were approached by Larch, who had allegedly fled after being identified by law enforcement. He asked the men for a ride. 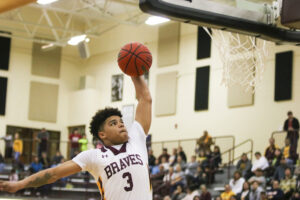 HELPFUL: Justus Day, a Mississippi Choctaw who graduated from Cherokee High School’s Class of 2018, helped to disarm a man who had a gun at a recent football game in Sylva. (SCOTT MCKIE B.P./One Feather)

Day described Larch as sweaty, as if he’d been running. Larch also had his hands behind his back.

Day didn’t know who he was. “I had no idea he was running from the cops.” Larch turned around to approach the driver, who wasn’t in the car, and that’s when Day noticed a gun.

As soon as he saw the gun, Day went for it. “I thought he was going to shoot one of us.” He accosted Larch and wrestled the gun to point in a direction away from people. Day eventually got the gun away. “I had a chance to get the gun, so I just took it. As soon as he let go of the gun, he ducked, took off and started running.” Larch was later apprehended by Sylva Police officers and the North Carolina Highway Patrol.

When Day and his friends learned who they encountered, they were a bit traumatized. His mother Ana Bell was frightened to learn of the event too. “We were just stunned. I was shocked. We just happened to be at the wrong place at the wrong time.”

Some could say he and his friends were in the right place at the right time because they helped disarm a fugitive, and their actions ultimately led to Larch’s capture. A news release from Catawba Valley Community College’s athletic department, where Day plays basketball, called his actions heroic. “I ain’t no hero,” he said. “I think it’s funny.”