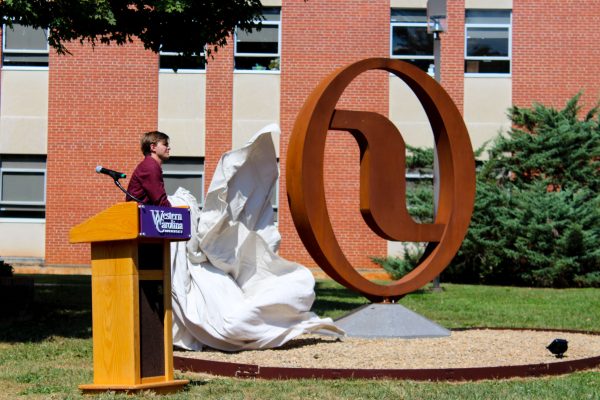 CULLOWHEE – The Cherokee language and syllabary were the inspiration for a new iron sculpture unveiled the afternoon of Friday, Sept. 21 on the campus of Western Carolina University. The artist who created the sculpture was student Todd Martin, and he chose the Cherokee Syllabary character of “wi” to model his piece. Martin’s work, based on the theme “Cherokee. Community. Culture. Connections”, is located in the courtyard outside of the Killian Education and Psychology building.

This is Martin’s final semester in Western’s fine arts program. He said this project started untraditionally. “We were researching, looking for ideas for this project, and we came across ‘wi’ the Cherokee Syllabary character, and became really enamored with this symbol.” He got the school on board.

Riggs said the character “wi” by itself is a word meaning, “the place.”

“It means we are in a place of greatness here.”

He said the location was always a place of higher learning. “This particular ‘wi,’where we are, where we now stand is also the site of an ancient Cherokee town.” He said the seat of the town, the mound, is where the Killian building now stands. “This spot, this ‘wi,’ remains very much part of the Cherokee world.”

Principal Chief Richard G. Sneed said, “For thousands of years, our people have dwelled on these lands where this campus is housed today.  For many centuries after European contact there was a concerted effort to extinguish and even wipe out the memory of native nations across this country.”

Sneed said he was honored to represent the Eastern Band of Cherokee Indians at this event and praised Western’s relationship with the Tribe. “This sculpture will, for generations to come, be a marker and reminder to all of the students and faculty who come to the courtyard that this land was Cherokee land first and will always be Cherokee land.”