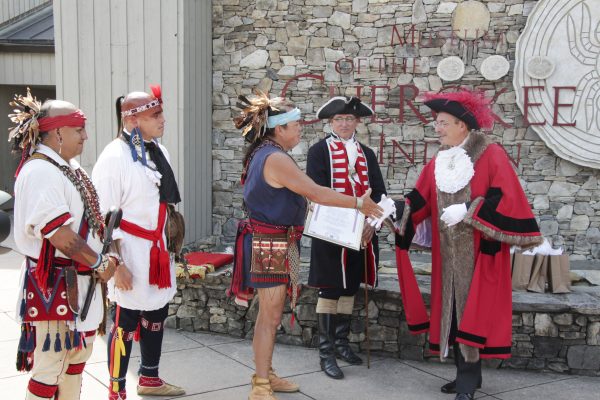 The Warriors of Anikituhwa and several other members of the Eastern Band of Cherokee Indians will be on their way to England later on this year.  The group will participate in the London New Year’s Day Parade and Festival, one of the most prestigious parades in the world, and they received an official invitation from Parade officials during an event held at the Museum of the Cherokee Indian on Sunday, Sept. 23.

Councilor Robert Davis, Deputy Lord Mayor of the City of Westminster and a Deputy Lieutenant of Greater London; London New Year’s Day Parade and Festival Executive Director Bob Bone; and other Parade officials delivered the official invitation in the form of a framed certificate.

He noted that himself and the other officials have several more invitations to deliver in the United States during their current week-long trip, but the invitation to the Warriors of Anikituhwa is the only one that is for the upcoming Parade.

“It’s great to be here,” said Deputy Lord Mayor Davis who related he has visited the Smoky Mountains before but not Cherokee specifically.  “This has been a very special experience for me and one I will certainly treasure forever.  I am looking forward to greeting everyone when they come to London on Jan. 1, and I hope that they not only love London as much as I love Cherokee, but I hope they will enjoy participating in the Parade.  It’s quite unique and quite special.” 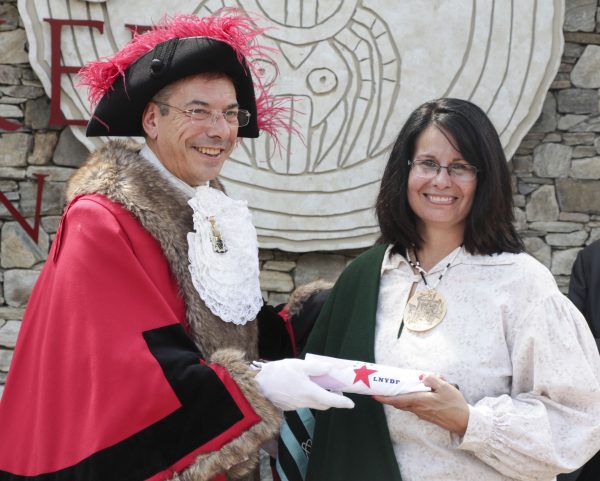 SPECIAL GIFT: Deputy Lord Mayor Davis presents an official London New Year’s Day Parade and Festival umbrella to Dawn Arneach. She will be the official keeper of the umbrella for the Eastern Band of Cherokee Indians contingent attending the event. Each group attending the Parade is given an umbrella in the hopes of warding off rain on the day.

To start Sunday’s program, the Warriors of Anikituhwa performed the Cherokee Welcome Dance which Bo Taylor, Museum of the Cherokee Indian executive director and member of the Warriors of Anikituhwa, explained is not exactly a Welcome Dance.  “When Timberlake came through Cherokee country, he thought it was a Welcoming Dance, but it wasn’t really a Welcoming Dance.  It was a way to let him know that we were still warriors.  We were willing to protect our land and our people.  So, that was why they were doing it.”

Following the dance, Bone commented, “I don’t think we’ve ever had a welcome like that anywhere in the world.”

He then told the crowd gathered, “I have the very, very happy job of being the director of London’s New Year’s Day Parade and Festival.  We’re constantly searching for brilliant performers to make our spectacular event in London ever greater.”

Turning to the Warriors, he exclaimed, “Now, we’ve found you! We know that you are going to be a terrific embellishment to our event in London on Jan. 1, 2019.”

Bone added, “It’s the greatest parade in the greatest city in the world.  We will have 8,000 performers on the streets of the City of Westminster on Jan. 1 watched by an audience of nearly two-thirds of a million people who come to enjoy the glorious sunshine that London gives on Jan. 1 every year…we have a huge television audience for our event and you can all see it on TV.  Six hundred (600) million people around the world will see you performing.” 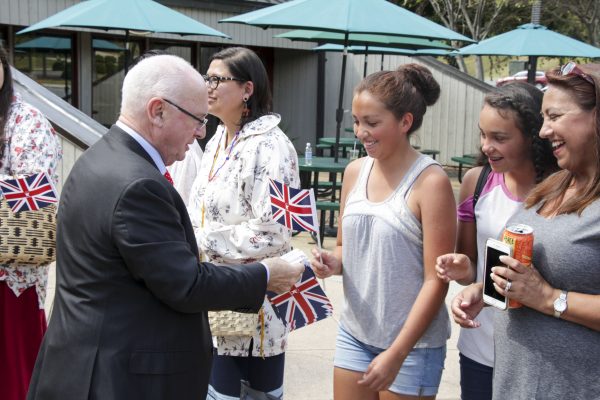 Deputy Lord Mayor Davis read the official invitation which states in part, “In recognition of a reputation for outstanding performance abilities, the Patrons and the Organizing Committee of London’s New Year’s Day Parade and Festival, in association with Youth Music of the World, the Lord Mayor of Westminster, the Lieutenancy of Greater London, and the London Mayor’s Association, take pleasure in extending an invitation to you and the Principal Chief of the Eastern Band of Cherokee Indians…”

During the event, the London Parade officials and the Warriors exchanged gifts.  Deputy Lord Mayor Davis presented the group with a special plate from Queen Elizabeth II and Buckingham Palace.

For more information on the Parade, visit: https://lnydp.com