ON THE SIDELINES: Pardon the cliché, but never give up

Who thinks they will go to a junior varsity football game and see the best catch they’ve seen all year?  Not me, but that’s exactly what happened on the humid evening of Thursday, Sept. 20 as the Cherokee JV Braves traveled to Swain County.

In the second half, Cherokee’s Kaden Trantham, wide receiver, ran down the left sideline for a pass.  Himself and Swain County’s Gabe Lillard went up for the ball, but Trantham jumped slightly higher and reached from behind Lillard and grabbed the ball.  Trantham bobbled the ball a bit on the way down but gained total control to complete the catch by the time he reached the ground.  It was a great play on both sides.  Lillard actually had better position for the ball, but Trantam didn’t give up.

Lillard had a nice game, and the JV Maroon Devils took the win, but on that play, Trantham amazed the crowd and displayed a wonderful cliché of sports – don’t give up. 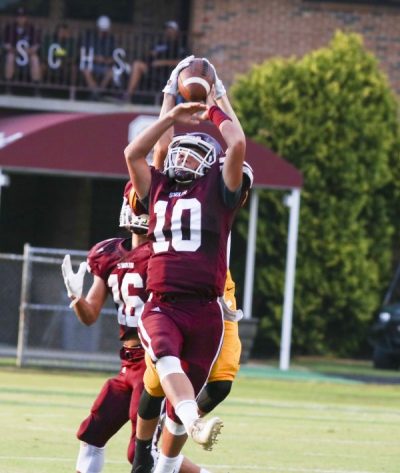 CATCH: You can only see the hands of Cherokee’s Kaden Trantham, behind Swain County’s Gabe Lillard (#10), but he reaches up and makes the catch during a game at Swain on the evening of Thursday, Sept. 20. (SCOTT MCKIE B.P./One Feather)

The late Wilma Mankiller, former Principal Chief of the Cherokee Nation, summed it up best when she said, “The secret of our success is that we never, ever given up.”

I’ve written before about comebacks in sports, but comebacks are just a combination of a bunch of moments, a pack of plays, where players decided to not give up.

Later on Thursday night, the Cleveland Browns notched one in the win column for the first time in 635 days.  That’s a long time to not win a game.  They were down 14 points in Thursday’s game against the Jets, but they didn’t give up.  That, and Heisman Trophy winner Baker Mayfield came into the game in the second quarter and led them to victory.  But, they didn’t give up.

The idea of not giving up is very cliché in sports.  My idol, Vince Lombardi, once said famously, “Winners never quit and quitters never win.”

Sadly, when I think of not giving up and having the fortitude to not quit, I don’t think of Coach Lombardi or other great men.  I think of a stupid meme cartoon I saw once that showed a frog choking a bird from inside the bird’s own neck – the meme had the tagline “never give up”.

While I hate that the meme is what I think of when I think of this subject, it is not untrue.

The last competitive race I ran was the Black Hills 5K in Rapid City, SD in the mid-90s.  I ended up doing pretty well finishing 19th out of over 300 competitors.  I was jazzed that Olympic Champion Billy Mills was going to be running with us that day.  I started out well, set my pace with some of the leaders and took off trying to make a race of it and just enjoying the brisk October South Dakota air.  I was actually ahead of Mr. Mills (yes, he is Mr. Mills…he has an Olympic gold medal), but with about 1,000 yards left, he blasted by me.

Was I going backwards?  Was I being weighed down by excess gravity?  No, he was just a lot faster than me even though he is quite older.  Well, long story short, I never caught him…I didn’t give up though and did finish well and won some prize for finishing in the top 20, but I have no idea what it was as it was a long time ago and I’m old now.