POUNCE: Cherokee’s Maliki Raby hauls in a Swain County fumble in a game at Swain on the evening of Thursday, Sept. 20. (SCOTT MCKIE B.P./One Feather photos)

BRYSON CITY – The final score didn’t reflect how close the game really was between the Cherokee JV Braves and the Swain County JV Maroon Devils on the last day of summer.  Cherokee lost 22-8 at Swain on the muggy evening of Thursday, Sept. 20.

The Maroon Devils got the ball first and drove down the field for the first score as Zack Stepp ran in for a 4-yard touchdown.  He also ran for the two-point conversion and Swain led 8-0 just three minutes into the game.

The Braves opened their first possession with a couple of first downs.  Don Bradley, JV braves quarterback, ran 34 yards to the Swain 15-yard line, but the drive stalled and Cherokee turned the ball over on downs. 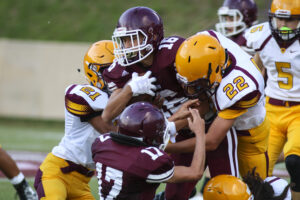 Several plays later, Cherokee’s Batiste Pepion recovered a Maroon Devils fumble at the Swain 43-yard line.  The Braves had a three-and-out.  In fact, neither team was able to move the ball for the rest of the half which ended with Swain on top 8-0.

Midway through the third, Swain scored again as Gabe Lillard, JV Maroon Devils quarterback, connected with Donnavin Groenewold on a 21-yard touchdown pass.  The two-point play failed, and Swain led 14-0 with 4:23 left in the quarter.

The Braves got on the board early in the fourth as Bradley threw a 9-yard touchdown pass to Brandon Martin.  Bradley threw to Eric Sallazar for the two-point play and the Braves trailed 14-8.

Several plays into Swain’s next drive, Cherokee’s Maliki Raby recovered a Maroon Devils fumble at the Cherokee 39-yard line.  The Braves moved the ball to the Swain 21-yard line but fumbled the ball themselves with just over two minutes left in the game.

Two plays later, Groenewold took off on an 80-yard touchdown run to seal the game for the Maroon Devils.  Stepp ran for the two-point conversion to make it 22-8 which is how the game would end.

Full statistics were not available for this game, and all yardages were recorded by the reporter at the game.  The JV Braves are back in action on Thursday, Sept. 27 at 6pm as they host the Murphy JV Bulldogs at Ray Kinsland Stadium.