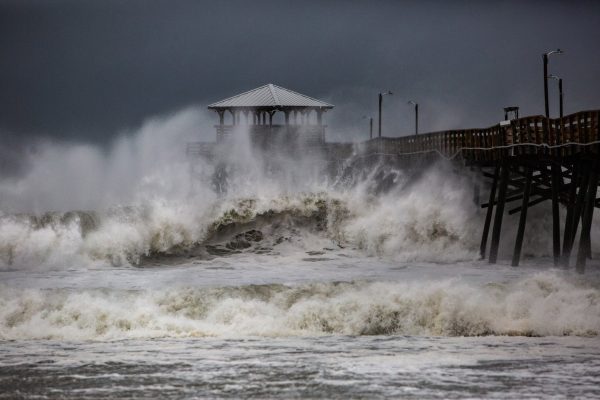 STORM COVERAGE: Oceana Pier at Atlantic Beach gets battered by wind, rain and waves from Hurricane Florence as it began to hit the coast Sept. 13. Tribal member Travis Long, a photojournalist for The News & Observer in Raleigh, was sent to cover the storm. (TRAVIS LONG/courtesy of The News & Observer, Raleigh)

Journalists often take major risks just to tell their stories and provide us with information. They’ve been in the middle of the worst, from the Civil War through the War on Terror. They were at the World Trade Center when the towers came crumbling down with William Biggart, a photojournalist, losing his life there. Natural disasters are also an area where journalists will be found in the worst of danger to tell their stories.

A member of the Eastern Band of Cherokee Indians was one of those. Photojournalist Travis Long, son of Harold and Nancy Long, was sent by his employer, Raleigh’s The News & Observer, to Morehead City to take photographs of monster Hurricane Florence as it made landfall Thursday evening. What was a Category 4 storm at one point had downgraded to a Category 1. Florence packed sustained winds of 90 mph with gusts of up to 105 mph, a dangerous storm surge, and it dumped up to 18 inches of rain.

It was Aug. 30 that the paper had sent Long to cover protests, both in support and opposed, to the Silent Sam Confederate monument at the University of North Carolina in Chapel Hill, where he got pepper sprayed by police. About two weeks later, he was off to the coast to document the brunt of Florence. As he waited for landfall Sept. 13, he was near the Oceana Pier in Atlantic Beach, and he said it was rocking and rolling.

Long’s parents own Long Family Farms near Murphy, an area that was awaiting heavy rain from Florence. Nancy Long said she and Harold were extremely proud of their son, but they also were anxious with him being in one of the worst possible places to be during a hurricane. “I think it’s one thing to go in the aftermath. It just makes me nervous.”

Scott Sharpe, News & Observer visuals editor, said, “What we aspire to do as photojournalists is to go where the reader can’t go, or shouldn’t go. We help the reader experience what others are going through.”

Long has won numerous awards from the North Carolina Press Association and National Press Photographers Association. “Travis is the guy who craves to be at the very front of what is going on,” said Sharpe.  “Sometimes that comes at a cost or putting yourself at risk.”

However, Sharpe emphasized that Long wouldn’t be taking any unnecessary risks.

“It’s still bearing down on us,” Long said Friday morning after the storm made landfall. With no power and mobile phone service that would cut in and out, Long said he’s had to navigate around flooded streets. They saw gas pumps toppled and a marina crumpled. Long and News & Observer Reporter Andrew Carter coped with LED lights, cooked on camp stoves, and attempted to sleep through the storm. “My colleague didn’t get much sleep last night.”

While he couldn’t say for certain without having watched weather reports, Long guessed that sustained winds were about 60 mph. Long also had covered Hurricane Matthew in 2016, which after initially landing in Haiti and Cuba, tracked into the Atlantic Ocean, hitting the coasts of South Carolina and North Carolina.

When he spoke to the One Feather Friday, Sept. 14, he said he was headed to New Bern, which was busy with water rescues due to flooded streets. Once again, he was striving to be at the front of the news.