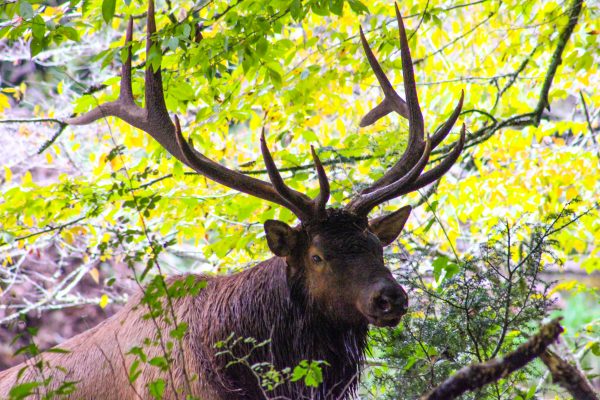 CAUTION: This large bull elk was spotted just off the Oconaluftee River Trail in the Great Smoky Mountains National Park on the afternoon of Tuesday, Sep. 11. Rut season has begun. (JOSEPH MARTIN/One Feather)

Officials with the Great Smoky Mountains National Park urge caution among visitors and residents as the start of elk breeding season begins. Elk were reintroduced to the park in 2001 after the last elk was believed to have been killed in Tennessee in the mid 1800s. By 1900, the animals were on their way to extinction.

Encounters with wildlife can always pose a risk. Park officials found the body of William Lee Hill, 30, of Louisville, Tenn., on Tuesday, Sept. 11. A bear was near where the body was found and acting aggressively. The bear was later found to have human DNA on him and was euthanized.

Elk are capable of killing or causing injury by goring, trampling or striking someone by charging.

Elk are now thriving and often will have interactions with motorists, tourists and residents of the park’s outlying areas, including Cherokee. Adult male elk (bulls) weigh an average of 600-700 pounds. Their bugling calls are made to challenge other bulls or attract females. It’s during breeding season, also known as the rut, that the bulls can be aggressive and dangerous. Park officials urge tourists to stay to stay out of the fields near the Oconaluftee Visitor Center and keep their distance, even if still in their vehicles as bulls can perceive them as a threat and charge.

“Bull elk, which can weigh nearly 1,000 pounds, are wild animals with unpredictable behavior,” said Park Wildlife Biologist Bill Stiver. “To help ensure your safety, maintain a distance of at least 50 yards from them at all times. Park in a safe location and remain close to your vehicle so that you can get inside if an elk approaches.”

The lure of wildlife to visitors can be tempting, but they still must maintain a safe distance. It’s illegal for them to get closer than 150 feet to a wild animal in the park. Feeding, touching or disturbing wildlife as well as willfully approaching elk or bears, are illegal. Officials urge using binoculars or telephoto lenses to view and photograph wildlife.