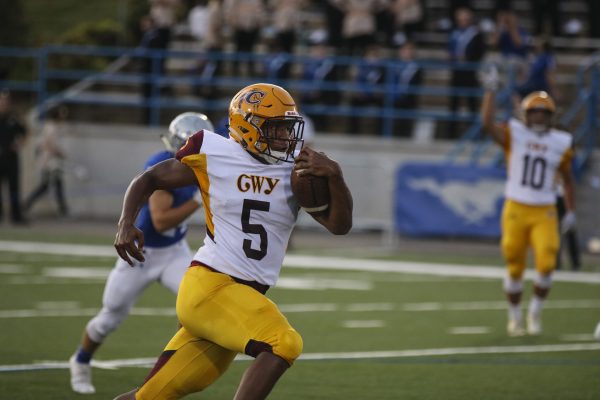 AND HE’S OFF: Isaiah Evans, Braves senior running back, leaves everyone behind on a 67-yard touchdown run in the first quarter of a game at Smoky Mountain on Friday, Sept. 14. On the night, he carried the ball 23 times for 148 yards and 1 touchdown. (SCOTT MCKIE B.P./One Feather photos)

SYLVA – With Hurricane Florence causing widespread football cancellations throughout North Carolina, the Friday Night Lights came on at Smoky Mountain High School’s Carr Hooper Stadium on Friday, Sept. 14.  The scoreboard didn’t quite match the offensive numbers as the teams combined for over 800 total yards but only 40 points as the Mustangs (4-0) topped the Braves (2-2) by a score of 28-12.

Smoky Mountain had 485 yards of total offense (9.3 yards per play) to Cherokee’s still impressive 371 (6.4 yards per play).  Bobby Crowe, junior quarterback, led the Braves completing 10 of 23 passes for 190 yards, 1 touchdown, and 2 interceptions.  His main target on the night was Cade Mintz, junior wide receiver, who caught 6 passes for 143 yards and 1 touchdown.

Despite going into Friday’s game with a few starters missing from the offensive line, the Braves still had 177 yards rushing.  Most of that came from Isaiah Evans, senior running back, who carried the ball 23 times for 148 yards and 1 touchdown.

Cherokee got the ball first in the contest and went three and out and were forced to punt.  But, Mintz drew a roughing the kicker penalty on the punt and the Braves got a first down.  Several plays later, Evans broke through the middle of the Mustangs defense and ran 67 yards for the first score of the game.  The point after kick was no good and Cherokee led 6-0 just a few minutes into the game.

Smoky Mountain’s first possession of the game lasted only three downs.  On third down, Blake Smith, senior defensive back, got the first of his two interceptions in the game.

The Braves were unable to move the ball though and punted to the Mustangs who began a long drive on their next possession all the way to the Cherokee 8-yard line.  That drive stalled, and Smoky Mountain turned the ball over on downs.

Cherokee’s next possession ended with an interception by Will Sutton, Smoky Mountain defensive back, at the Braves’ 28-yard line.  Several plays later, the Mustangs were in the end zone as James Hinson, senior quarterback, completed a 13-yard touchdown pass to Cody Lominac, senior wide receiver.  On the night, Hinson completed 10 of 14 passes for 218 yards and 2 touchdowns.

The point after try was good and Smoky Mountain took a one-point (7-6) lead at the 9:35 mark of the second quarter.

Following a Cherokee punt, Smoky Mountain drove down the field and Hinson hit Dustin Stephens, sophomore wide receiver, on a 29-yard touchdown pass with 6:50 left in the half.  The point after kick was good, and the Mustangs led 14-6.

Cherokee drove deep into Mustangs territory on their next possession as Crowe hit Mintz on a 58-yard pass down the right sideline all the way to the Smoky Mountain 5-yard line.  The drive stalled, and Cherokee’s field goal attempt on fourth down was blocked.

On the next play, Smoky Mountain had a 54-yard touchdown pass called back for a holding penalty.  After that, the Braves shut them down behind two big tackles in a row by Masih Catolster, freshman defensive lineman.

Smoky Mountain took a 14-6 lead into the locker room. 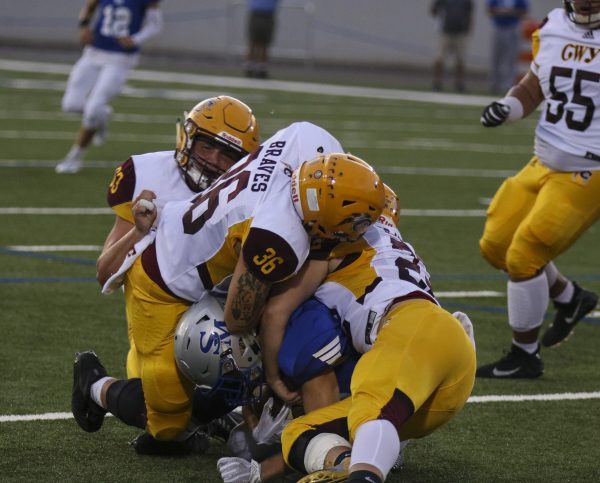 GROUP: Cherokee senior linebackers Damion Blanton (#36) and Kyler Hill (#23) combine on a tackle of a Mustangs running back.

The Mustangs got the ball first in the third quarter and struck quickly as they drove down and Hinson ran for a 1-yard score not even two minutes in.  The point after kick was good and the Mustangs led 21-6.

Several plays later, the Mustangs got on the board again as Will Frady, junior running back, ran through the middle on a 54-yard touchdown run to put the Mustangs up by 16 (28-12) which is how the game would end.

Neither team fumbled the ball in this contest, and each had two interceptions.  The Braves were penalized 6 times for 45 yards, and Smoky Mountain had 10 flags for a whole field (100 yards).

Defensive statistics were not available for this game for either team.

Cherokee is back at home against the Gladiator Sports Academy (0-2) on Friday, Sept. 21 which is homecoming for the Braves.