ON THE SIDELINES: JV is not about the score, it is about the experience 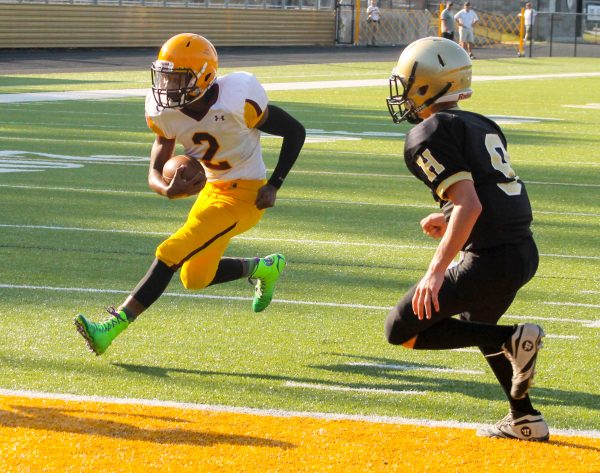 WORK: Isaiah Evans, Braves senior running back, is shown during his junior varsity days running into the end zone on a two-point conversion play during a game at Hayesville on Aug. 29, 2014. He is now one of the top running backs in all of western North Carolina. (SCOTT MCKIE B.P./One Feather photos)

The Cherokee JV Braves started their season on Thursday, Sept. 13 as they hosted the Robbinsville JV Black Knights.  The game didn’t end up the way they wanted to, but the score doesn’t really matter.  In junior varsity sports, the score isn’t nearly as important as the experience – that invaluable game experience.

Tennis star Billie Jean King once said, “Champions keep playing until they get it right.”

I’ve written before about the importance of training and practicing hard, and that’s essentially what junior varsity is – training and practice.  Sure, they keep score, sell tickets, have real officials, and even have cheerleaders, but the focus should really be allowing those young players to gain playing time. 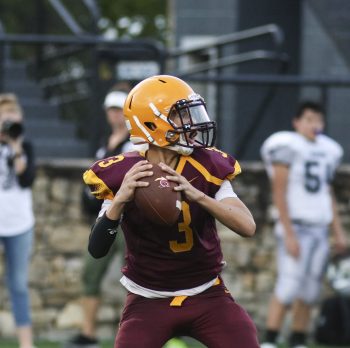 PRACTICE: Don Bradley, JV Braves quarterback, drops back for a pass against Robbinsville on Thursday, Sept. 13. Today’s JV Braves are tomorrow’s Braves and are putting in the work to excel at the varsity level.

As I was doing some research for this column, I went back to re-read some of the previous year’s articles I’ve written on the JV Braves football team.  The 2014 team in particular is intriguing as it included many of the same boys that are now wearing 2017 state championship rings including: Tye Mintz, Isaiah Evans, Zak Perez, Holden Straughan, Demetryus Bradley, and others.

Chris Mintz was the head coach for the JV Braves 2014 team.  Following their win at Andrews on the season finale game, he told me, “It’s been a fun year with these guys.  These guys have been really exciting to watch.  It’s been fun to watch them grow, and to come from being 0-6 last year and to turn it around and play with confidence has been fun to watch.”

Playing with confidence.  Growing.  Fun.  Those are the tenets of what junior varsity football and sports should be.

There is a pretty familiar story about Michael Jordan that he was cut from his high school team.  Actually, he was placed on the JV team his sophomore year so he could get more playing time and further develop his skills.  That worked out pretty well.

My favorite coach of all time, Vince Lombardi, once said, “The only place that success comes before work is in the dictionary.”

Student-athletes playing junior varsity sports put in that work and time and gain the experience and composure necessary to be able to play at a higher level and maybe one day try on a ring.