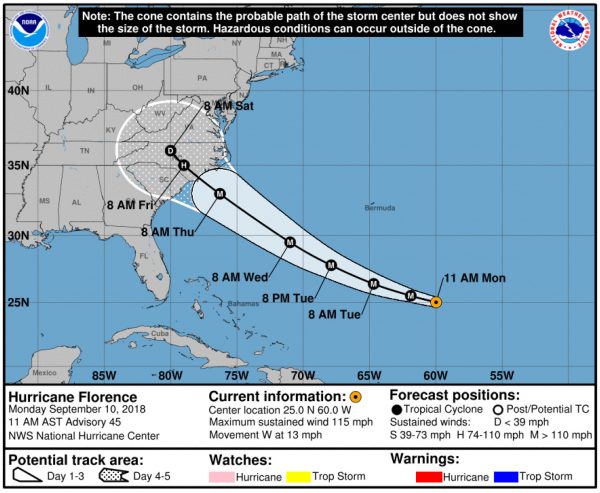 With states of emergency declared in South Carolina, North Carolina, and Virginia, emergency management officials in the counties in western North Carolina and the Eastern Band of Cherokee Indians are keeping a watchful eye to ensure that residents are safe with a looming hurricane. Hurricane Florence intensified to Category 4 strength, the same as Hurricane Katrina in 2005. It’s expected to make landfall Thursday, Sept. 13. The storm hits at a time after days of rain, and that could pose problems.

Category 4 storms pack winds ranging from 130 mph to 156 mph, and Florence, as of late Monday morning, had sustained winds of 130 mph. The storm is projected to hit the coast near Wilmington.

Gov. Roy Cooper issued a state of emergency on Friday, Sept. 7.  He said the storm is expected to cause significant damage to public and private property, and there will be an expected risk of injury or death. “While it’s still too early to know the storm’s path, we know we have to be prepared.”

While Cherokee and its trust lands rest about 400 miles from where the storm will make landfall, the storm could impact the region. Tim Doyle, a meteorologist with the National Weather Service in Morristown, Tenn., said right now for the region, the storm’s impact on this area is just something to watch. “The main thing is the rainfall.” There may also be some wind, he said.

Tribal Director of Public Safety Mollie Grant had been briefing the tribal programs that would respond in case of an emergency. “We don’t know how much rain we’re going to get, but there could be flooding.” She said they’re also ready to assist the state if needed. “Our swift water rescue team has been put on standby should the state need them.”

Grant also announced the Code Red emergency notification system, where people can sign up to receive notification by mobile phones.

County emergency managers were on alert but mainly were watching for impacts from increased rainfall they were monitoring the situation. “As far as Cherokee County is concerned, we are maintaining situational awareness,” Cherokee County Emergency Management Director Robin Caldwell said.

Swain County Emergency Management Director David Breedlove said that the Red Cross and social services have reached out to him offering shelter if needed.