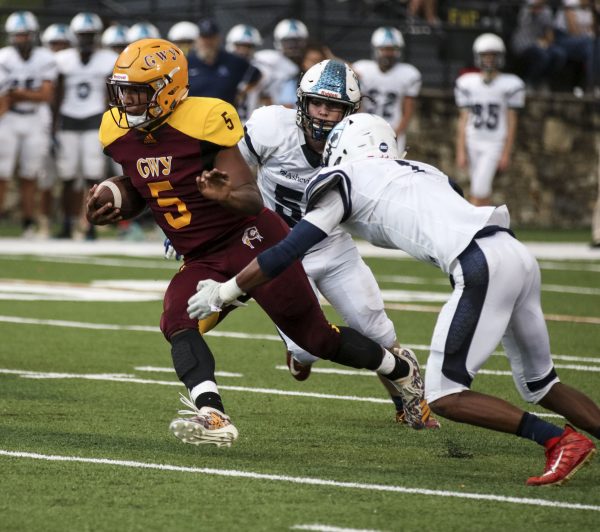 RUNNING: Isaiah Evans (#5), Braves senior running back, takes off past Asheville School’s Titus Morrison in the first half of a game at Ray Kinsland Stadium on Friday, Sept. 7. (SCOTT MCKIE B.P./One Feather photos)

For such a wet and rainy night, Cherokee (2-1) and Asheville School (2-1) surely put up some big offensive numbers.  The teams combined for close to 900 total yards of offense (Cherokee 525, Asheville School 370) and almost 80 points as the Braves topped the Blues 52-26 at Ray Kinsland Stadium on Friday, Sept. 7.

“You have to give them credit,” Kent Briggs, Braves head football coach, said of the Blues following the game. “They’re a good football team.  They’ve got some really good players.  Their quarterback was outstanding.”

Following a slow start in the first quarter, both teams got going in the second quarter and went into halftime with the Braves leading by six (24-18).

“We lost our leverage a little bit, but we got it back in the second half and came out and played with intensity,” Coach Briggs noted.  “I knew this was going to be one of those games where we would have to go out and play to win, and that proved to be true.  But, our guys responded at halftime and came out and played a really strong second half and kept the heat on them.  I’m really proud of the win.  We still have a lot of things to do to get better because we have a lot of tough teams down the road.  We have a tough one next week, and plus we’re a little banged up so we’ll have to have the guys in the backup roles come through.” 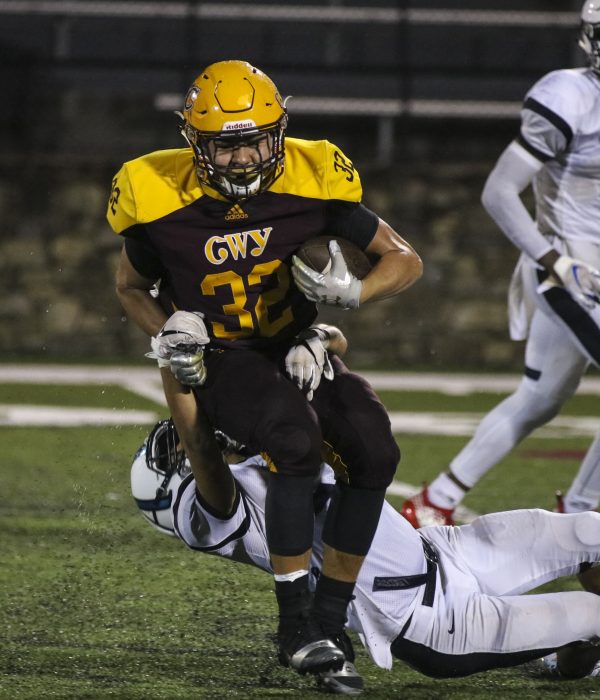 Asheville was led by Chris Hemphill, junior quarterback, who completed 5 of 17 passes for 81 yards and 1 interception.  He also carried the ball 13 times for 96 yards and 2 touchdowns.

The first quarter of the game saw several punts and three-and-outs as both teams adjusted to the rainy conditions.  Cherokee got on the board as Rocky Peebles, senior kicker, hit a 21-yard field goal midway through the quarter to put the Braves up 3-0 which is how the quarter would end.

The second quarter had the most action in the game as both teams scored three times.  The score fest started five seconds in as Evans ran for a 9-yard touchdown.  Peebles added the extra point and Cherokee led 10-0.  Less than two minutes later, Crowe connected with Smith on a 48-yard touchdown pass down the left sideline.  Following Peebles’ point after, the Braves led 17-0 with 9:57 left in the half.

Asheville School got on the board a minute and a half later as Hemphill ran 17 yards for a score.  The point-after attempt was blocked, and the Braves led 17-6. 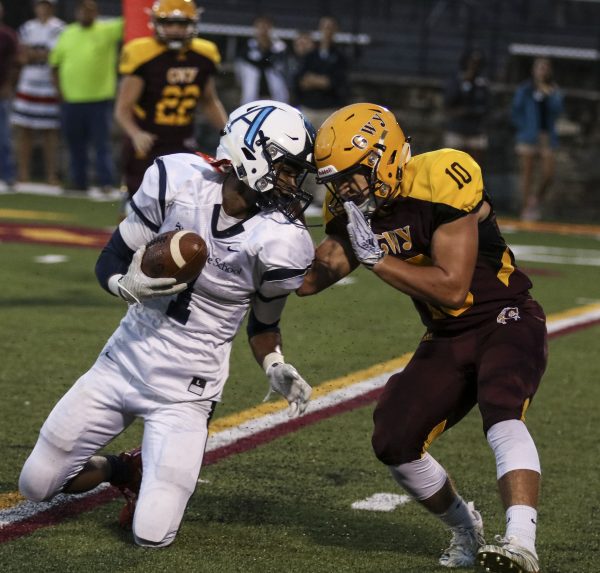 The Blues would score two more times before the half.  Hemphill ran for a 25-yard touchdown midway through the quarter, and he threw a 19-yard touchdown pass to Titus Morrison a minute later.  Both two-point conversions failed, and Asheville School took a one-point (18-17) lead with 5:36 left in the second.

Cherokee would score once more in the half as Smith caught a 63-yard touchdown from Crowe.  Peebles’ point-after kick made it 24-18.  The Blues missed a field goal with just over a minute left in the half, and the Braves led by six at the break.

Cherokee scored twice in the third on a 29-yard run by Evans and a 49-yard interception return by Cade Mintz, junior defensive back.  Peebles added both point-after kicks, and the Braves led 38-18 at the end of the third.

The Braves added two more scores at the beginning of the fourth as Terence Ledford, senior running back, ran for two touchdowns (2 yards, 32 yards).  Darius Lambert, senior kicker, came in and added both point-after kicks to make it 52-18.

The Blues scored once more in the contest as Uchenna Ikwuakor, senior running back, ran for a 37-yard touchdown.  He also ran for the two-point conversion to make it 52-26 which is how the game would end.

Asheville was led defensively by Ikwuakor with 10 tackles.  Cherokee’s defensive statistics have not been received as of the publishing of this article online.  If they are received prior to press time, this article will be updated.

Following three home games to start their 2018 campaign, the Braves take the show on the road to Smoky Mountain (3-0) on Friday, Sept. 14.