The Principal Chief of the Eastern Band of Cherokee Indians is seeking to become the president of an organization representing 27 federally recognized tribes.  Principal Chief Richard G. Sneed announced his candidacy for president of USET (United South and Eastern Tribes) on Thursday, Sept. 6 during the end of the regular Tribal Council meeting.

Council passed an emergency resolution at the end of the agenda nominating Chief Sneed for the president’s race and giving him their support.  The resolution passed unanimously.

The election will occur during the USET SPF (Sovereignty Protection Fund) Annual Meeting, hosted by the Seneca Nation of Indians (New York), on Oct. 8-11.  According to USET officials, candidates will present their platforms on the second day of the event and the election will occur the following day.  A list of candidates has not been finalized by the organization at this time. 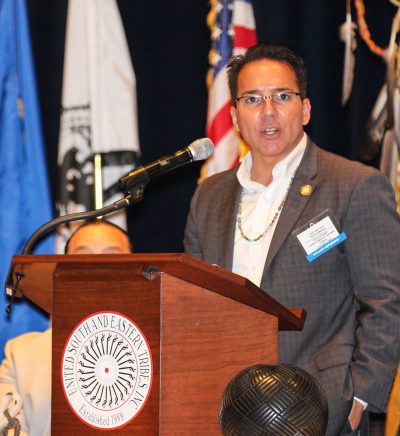 UNITED: Principal Chief Richard G. Sneed speaks at the opening of the USET SPF (Sovereignty Protection Fund) Annual Meeting at Harrah’s Cherokee Casino Resort Event Center on the morning of Oct. 9, 2017. He is vying for the office of USET president which will be decided at this year’s Annual Meeting which will be hosted by the Seneca Nation of Indians (New York) on Oct. 8-11. (SCOTT MCKIE B.P./One Feather)

The resolution passed by Council reads in part, “The founding of USET began on Oct. 4, 1968 when the Eastern Band of Cherokee Indians, one of the four founding Indian tribes of USET, with the Mississippi Band of Choctaw Indians, the Miccosukee Tribe of Florida, and the Seminole Tribe of Florida met in Cherokee, North Carolina with the shared idea that some form of unity between the tribes would facilitate their dealings with the federal government.”

The resolution continued, “USET has a long history of strong leadership through its past and present USET presidents.”

During Thursday’s meeting, Chief Sneed thanked Council for their support and stated, “USET was first formed here in the south.”

He said it was formed during the early years of federal self-determination policies when dealing with tribes.  “The federal government had moved away termination where they were actually terminating tribal rights and doing away with reservations, and they moved into self-determination.  The four southern tribes, at that time, saw the value in coming together in strength, in unity, and coming together as a united voice, or strength in numbers approach, in dealing with these government-to-government relations.”

Chief Sneed said that over time other tribes were added to the organization from the eastern seaboard and northeastern part of the United States.  “The shift really went to the northern tribes, and there was not a lot of focus on things that were happening in the southeast.  If you’re not familiar, the Eastern Band is really a very strong presence on all of the (USET) committees there.  If you go to any of the break-out sessions or committees, the Eastern Band is leading in most of that.  However, as far as the agenda for the organization and the direction that the organization is going, a lot of the focus still seems to be on the northeast and I just felt like we are a founding tribe, we are one of the driving forces in that organization, and should I win the election for the seat of president there, we would have a very strong voice for the direction of the organization and bringing it back to a more equitable distribution of power.”

Big Cove Rep. Perry Shell commented, “It is time for the original tribes to have a stronger voice…we need to have that voice.”

He added, “I hope that we have an opportunity to have more influence and a stronger voice in this, and I hope you win it.”