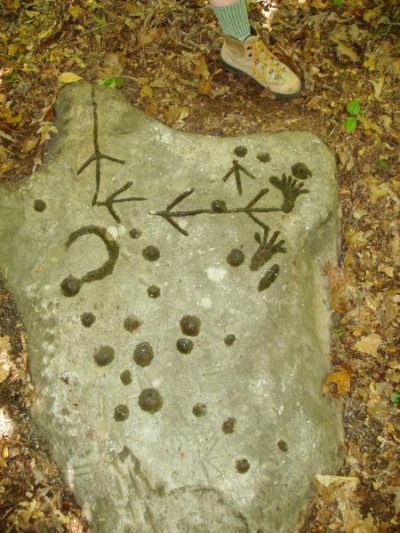 HISTORY: Water is used to contrast the symbols on Turkey Track Rock. The history for the site of these carvings in soapstone boulders dates back more than 5,000 years. (Photo by Scott Ashcraft, archaeologist with the United States Department of Agriculture Forest Service, Pisgah National Forest.)

Aculturally significant resource will be turned over to tribal control as Tribal Council approved the purchase during Budget Council on Tuesday, Sept. 4 of land near Franklin containing soapstone boulders with petroglyphs. For the appraised price of $55,120, the Council passed a resolution authorizing the purchase, which would protect the carved images into a rock, similar to Judaculla Rock near Sylva.

Yellowhill Rep. Tom Wahnetah supported the purchase. He said, “These stones have significant connections to Judaculla Rock. They’re all connected.”

Tribal Historic Preservation Officer Russ Townsend told the Council, “Turkey Track Rock would be a great purchase for the Tribe.” The property is about five and a half acres. “I think it’s good that we take the opportunity to purchase these and remove them from private hands and put them in the public trust where we can take care of them.”

“The history of the site dates back more than 5,000 years. It was under Cherokee control until about 1819 when it was ceded by treaty,” Townsend said. The petroglyphs on the site are part of a chain of similar sites stretching from Black Mountain to Brasstown near Murphy, sites that include Judaculla Rock near Sylva.

“Is there anybody who can read the petroglyphs,” asked Painttown Rep. Tommye Saunooke.

Rep. Saunooke hoped that schools would set up tours for their students. “This would be a great opportunity for the children to see.”

Townsend said what differentiates Turkey Track from Judaculla is that Turkey Track is carved on several smaller boulders as opposed to one boulder. “Turkey Track has some of the same kinds of inscriptions as on Judaculla.”

Martha Solesbee, the owner of the property, has had it in her family for four generations, more than 100 years.

Townsend said she wanted to keep the site protected from developers or vandals, “It was her hope it would go to the Tribe or some archaeological conservancy. The asking price demonstrates good intentions on her part. We’re very grateful that she and her family have protected this resource. ”

Principal Chief Richard G. Sneed said the site is certainly historically significant. “I wanted to thank (Townsend) and Bill Taylor (governmental affairs liaison) for going out. They went out and met with the landowner. Russ went out and looked at the stones, confirmed the archaeological and historical significance.”

Chief Sneed said the site is surrounded by an area with a lot of development, and buying Turkey Track Rock would protect it. “We’d hate to see all that dozed over, so I would ask council’s support.”