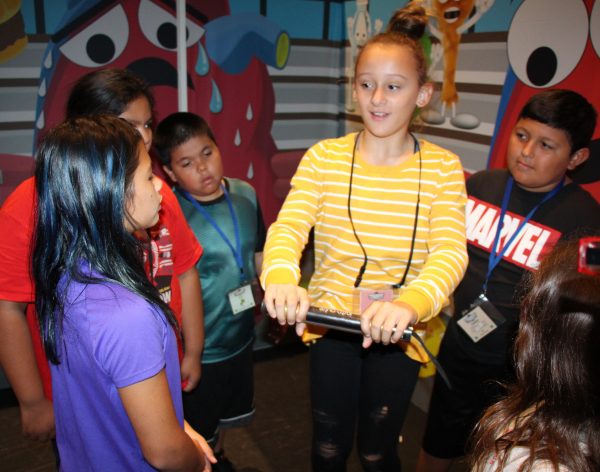 Almost one in three (30.9 percent) of North Carolina youth between the ages of 10-17 are considered overweight or obese.  The Tarheel state ranks 25th in the country for that rate according to the State of Obesity report released last year by the Trust for America’s Health and the Robert Wood Johnson Foundation.

In an effort to combat childhood obesity, Cherokee Elementary School and New Kituwah Academy students learned about the human body in an exhibit called Speedway to Healthy which was set up in the Chief Joyce Dugan Cultural Arts Center on Sept. 5-6.  The 1,200 square foot exhibit, which has sections representing the major organs and systems of the human body, was created as a 4-H Youth Development Cooperative Extension project courtesy of North Carolina A&T State University.

“We hope to show to the kids that healthy eating affects every organ in the body and to show how it affects the organs in the body,” said Janet Owle, EBCI Cooperative Extension agent, who was responsible for bringing the exhibit to Cherokee.

The Speeding to Healthy exhibit is free of charge to schools, and this particular exhibit was set up the day before by EBCI Facilities Management and participants in the Mother Town Healing Project.  The exhibit itself was staffed by tribal and area health officials.  “It’s all volunteer-based,” said Owle. 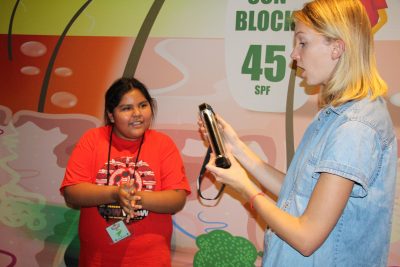 Owle worked with the SHAC (Student Health Advisory Council) at Cherokee Central Schools to bring the exhibit to the campus.  Kelly Canaday, Cherokee SHAC coordinator, noted that the group is trying to take a more moderate approach now in relation to health choices.  “We want to target people where they’re at and not chastise them for the way they eat.  We want to educate them about the types of foods that they’re eating and let them know that there are moderate alternatives.”

Canaday said that slight, simple changes to a diet can make a big difference.  “They don’t have to completely change their diet.  They can still go out to eat.  They can still hit a fast food restaurant, but it’s more about choices and moderation – having a little bit every now and again instead of having a lot every day. Targeting the kids with that helps bring that educational component home.  They start asking questions of mom and dad and start questioning some of those lifestyle choices.”

She said that a program like Speedway to Healthy that targets students from Kindergarten to fifth grade is very timely.  “It is really a good idea to catch the young ones before those habits are developed or as they’re developing and letting them know that there are other choices other than what’s always put in front of them.”

Dr. Michael Murray, Cherokee Central Schools superintendent, commented on the program, “What we’re doing is bringing science alive by integrating it in a hands-on approach.  To build engagement in the classroom, it’s critical to make sure that you just don’t read it out of a book, that you participate in it, you see how it ties into your every day.”

A former science teacher, he further said, “I’m extremely excited about today.  It’s bringing science to life for a lot of kids.”

Dr. Murray said the event also gave an opportunity for collaboration.  “We are excited that we invited New Kituwah Academy because, truthfully, those are our kids too.  As a school leader, I’m excited to extend the invitation to make sure that they participate in events like this with us because we truly feel like they’re our children and we want them to be part of things that we are doing.”

Canaday noted that everyone in the community is welcome to become active with SHAC which meets every second Wednesday of the month at 3:15pm in the Chief Joyce Dugan Cultural Arts Center gallery.