To some he was an obstructionist and a maverick. To others he was a voice of reason and civility. But to tribes, he’s mostly remembered as an advocate, patriot and a hero.

Sen. John McCain (R-Ariz.) died Saturday, Aug. 25 after a battle with glioblastoma, an aggressive form of cancer that occurs in the brain or spinal cord. McCain’s service to the United States goes back more than 50 years, with a military record that many say exemplifies courage and sacrifice. His service in politics took him to the House of Representatives and the Senate. He was a sitting senator until his death. 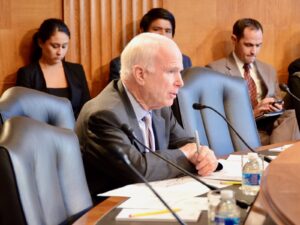 DuPree said one is supposed to lead by example in the military. McCain, a naval aviator, spent more than five years as a prisoner of war after being shot down over North Vietnam, giving his captors little more information than his name and rank.  “He knew the meaning of sacrifice. We cannot imagine what he was able to endure. I have the utmost respect for him.”

Steve Youngdeer Post Cmdr. Lew Harding served in the U.S. Navy in Vietnam at the same time as McCain. He also served as a naval aviator on the U.S.S. Intrepid, sister ship to the U.S.S. Forrestal, McCain’s ship. Both Harding and McCain flew the same missions over the North Vietnamese capitol. “Many of the missions I flew were over Hanoi. John did the same.”

Harding noted that McCain was highly respected. “He was a superstar, just humble in his ways.” McCain even drew admiration from his North Vietnamese jailer, who described him as tough. “He was deeply loved and admired and appreciated by all of us,” Harding said.

McCain’s representation of tribes has been a complicated one, especially in his final years, but mostly tribes appreciated his advocacy. Wilson Pipestem, the Eastern Band of Cherokee Indians’ Washington lobbyist, said McCain supported almost anything tribes wanted. “For many years, he was a champion of tribal issues on the Republican side.”

However, McCain’s support for tribes began to wane when he ran for president, Pipestem said. McCain began to be critical of tribal gaming. He voted against the Violence Against Women Act, a bill that the Eastern Band has used to prosecute non-Indian domestic violence offenders. He supported a deal to sell Apache sacred land to a copper mining company.

Pipestem said some of this was to distance himself in response to conservative critics of his support for tribes and tribal gaming. “I think that was to insulate himself politically.”

However, McCain will be remembered locally for his support of tribal programs and one big issue particularly that led to a new Cherokee Central Schools location to replace outdated and deteriorating buildings. “I think he supported our land exchange bill,” said Pipestem.

And for another reason many tribes remember McCain fondly, Pipestem said, “He was always a supporter of native veterans.”

Paxton Myers, chief of staff for Principal Chief Richard G. Sneed, had interacted with McCain through his work with the National Indian Gaming Commission and former U.S. Rep. Dale Kildee (D-Mich.). He described McCain as a unique individual. “He was very stern but fair. He was always upfront and honest with us. You always knew where you stood.”

Myers remembered that McCain championed native issues and sought to better the lives of Native Americans. “We didn’t always agree on the issues, but he was an American hero.”