CULLOWHEE – If the warmer and wetter than normal conditions prevalent across western North Carolina over the summer continue into September, fall leaf colors in the mountains are likely to be muted, but a transition into a normal weather pattern would result in a brighter tapestry of hues across the region.

That’s the word from Beverly Collins, Western Carolina University’s autumnal season soothsayer and prognosticator of leaf pigment potency. A professor of biology at WCU, Collins combines her knowledge of forest ecology with observations of weather trends to assess the potential for a big leaf color season. 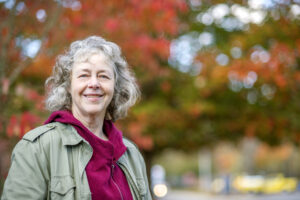 LEAVES: Beverly Collins, Western Carolina University’s autumnal season soothsayer and prognosticator of leaf pigment potency, states that if the warmer and wetter than normal conditions prevalent across western North Carolina over the summer continue into September, fall leaf colors in the mountains are likely to be muted. (WCU photo)

“Warm and wet conditions are great for photosynthesis, but the sugars that are made tend to be used in tree stem and leaf growth, rather than accumulated in leaves, where they can trigger the tree to make less chlorophyll (the green pigment) or produce anthocyanins, the red color we see in fall,” she said.

The weather typically becomes drier in the western North Carolina mountains during autumn, which is what long-range forecasts are indicating for this year. “If that comes to pass, leaf color could very well turn out to be brighter, but still a little more muted than normal because photosynthesis and chlorophyll production slow in the fall as the days get shorter and temperatures cool,” Collins said.

Leaf fanatics want to know when the color will be at its peak. Collins said the declining daylight of late summer and autumn is the primary factor affecting the timing of the colors. “In the Western North Carolina mountains, colors begin to appear in early September as the shortening days cue color change in plants such as sumac and sourwood,” she said.

However, weather also contributes to the timing of fall color, and if the weather stays warmer than normal, the peak could be delayed and more spread out over time, Collins said. For example, many of the towns in WNC’s southwestern mountains are located in valleys at around 2,000 feet in elevation, and peak color there might be delayed until the fourth week of October, rather than happening the week before. Generally, the peak occurs at higher elevations north of Asheville in early October, and then works its way down the mountainsides and to the southwest across the region, she said.

The quality of the fall leaf season isn’t just related to the sharpness of the hues, but also is influenced by the spectacular variety of tree species in western North Carolina that create a patchwork quilt of color that blankets the mountains, Collins said. The highest elevations along the Blue Ridge Parkway and in Great Smoky Mountains National Park feature red spruce and Fraser fir trees that retain their green needles all year, but below those trees is the northern hardwood forest of maple, cherry and birch trees that often shows its red and yellow colors early.

Even lower down, the mixed oak and hardwood forest usually retains its red, orange and yellow colors for a longer period. Overall, the high species diversity and varied topography of WNC is likely to provide some inspiring scenery for the typical traveler who visits the region through October and into early November, Collins said.