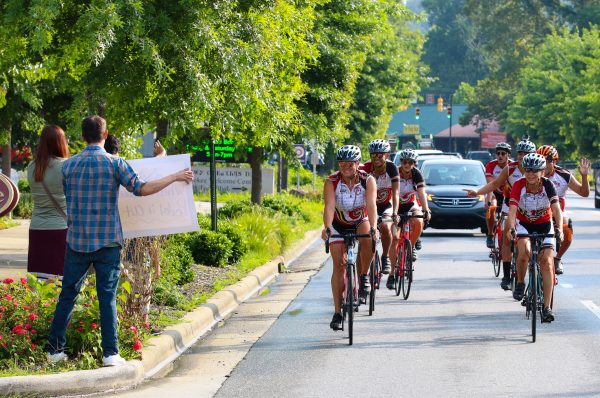 GRAND: With family and friends holding encouraging signs, the 2018 Remember the Removal Riders from the Eastern Band of Cherokee Indians ride into a welcome back event held at the Tribal Council House on the morning of Wednesday, July 11. The Remember the Removal Riders alumni (2011-18) will be the Grand Marshals for this year’s Cherokee Indian Fair Parade set for Tuesday, Oct. 2. (SCOTT MCKIE B.P./One Feather)

The route for this year’s Cherokee Indian Fair Parade was changed earlier in the month, and now it has been changed back to the original route.  EBCI Destination Marketing officials noted that staging for the parade, scheduled for Tuesday, Oct. 2, will occur at the lower parking lot at Harrah’s Cherokee Casino Resort where it has for many years.  The parade will terminate, as usual, at the intersection just past the Museum of the Cherokee Indian. Officials declined to comment further on a reason for the recent change.

The theme of this year’s Cherokee Indian Fair is “Gadugi: Heartbeat of Our Tribe”.

The Grand Marshals for this year’s Cherokee Indian Fair parade will be the Remember the Removal Riders Alumni (2011-18) who participated in the bicycle ride from New Echota, Ga. to Tahlequah, Okla., retracting the northern route of the Trail of Tears.

“The Remember the Removal Alumni Riders are so honored and privileged to be selected as this year’s Grand Marshals in the parade,” said Sheena Kanott Lambert, a 2011 rider.  “We are excited to be given the opportunity to kick off the 106th Annual Cherokee Indian Fair that is over a century old and part of Cherokee tradition.”

Lambert noted that the group will not have a float.  Some will ride their bicycles, some will walk, and others will ride in the back of a truck.

Josie Long, Cherokee Indian Fair Parade coordinator, related why the committee chose the riders.  “Our committee selected the Remember the Removal alumni as the Grand Marshals for this year’s 2018 Cherokee Indian Fair Parade because of the process each participant must commit to, the grueling journey they endure, and the cultural and historical impact on their lives as they retrace our ancestors steps along the Trail of Tears.  With the two nations coming together, we see them all experience and demonstrate Gadugi not just to each other but to our people, the Eastern Band of Cherokee Indians and the Cherokee Nation of Oklahoma.”

The Birdair tensioned membrane structure, aka tarp, covering the amphitheater was damaged recently and is in need of repair.

“Wind damage to the Fairground canopy resulted in a unified effort to find the right engineering team to complete the repair,” said Mike Parker, EBCI Destination Marketing director.  “That firm has been identified and a schedule of repairs is being created.  The 2018 Cherokee Indian Fair will proceed as scheduled.”

Phoenix Engineering and Consulting, Inc. has been slated as the structural engineer firm on the project, and Atlanta Rigging Systems will perform the physical repairs.  Destination Marketing officials relate that cost is estimated at $25,000 as of now.