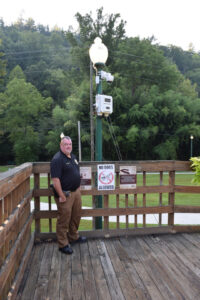 CAMERAS: Doug Pheasant, Cherokee Chief of Police, poses beside cameras installed recently at the Oconaluftee Island Park to enhance security in the area. (Photo courtesy of Office of the Principal Chief)

The Cherokee Indian Police Department is having 10 Tsunami Security Cameras installed that will be placed throughout Cherokee.  These Tsunami Cameras will be mounted in areas that experience a high rate of reported crime and will give the CIPD the capability to electronically patrol these areas and access evidence of reported crime.

“One of our department goals is to reduce, solve, and prevent crime,” said Doug Pheasant, Cherokee Chief of Police.  “These cameras are a tool for us to reach that goal. We plan to place the cameras in areas where we have had a high number of incidents or crimes reported and in areas of high traffic. In a sense they are force multipliers.  We will now have ‘eyes and ears’ in these areas 24 hours a day seven days a week.”

Two cameras have been successfully installed; one being located on the bridge accessing the Oconaluftee Island Park and one near Harrah’s Cherokee Casino Resort.  Additional cameras will be placed in the Food Lion parking lot, McDonald’s, and in areas experiencing a high rate of reported crime.  These cameras can be accessed via app, giving CIPD live access to monitor situations in real time.

CIPD officials noted the main goal of these cameras is to deter crime in high traffic areas, particularly areas where children may be exposed or harmed.  The CIPD Narcotics unit will have the ability to move these cameras based upon reported crime and ongoing investigations.

“Drug use and overdose has become commonplace here on the Qualla Boundary,” said Principal Chief Richard G. Sneed.  “That is unacceptable in my opinion.  As Principal Chief, I am working to attack this substance abuse problem plaguing our Tribe at every level possible.  It is a slow, difficult and sometimes painful process, but one that I feel is of utmost importance to healing our people.  I am proud of the work being done by the Cherokee Indian Police Department, and I applaud them for their efforts.”

– Office of the Principal Chief