ON THE SIDELINES: Sports provide moments in time 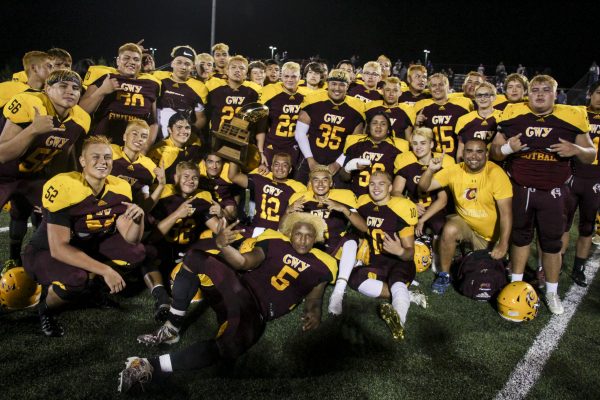 TIME: Moments like the one captured above of the Cherokee Braves posing with the Battle of the Nations trophy at Ray Kinsland Stadium on Friday, Aug. 24 are treasures frozen in time. (SCOTT MCKIE B.P./One Feather)

This past Friday, I had the pleasure of watching the Cherokee Braves hoist the Battles of the Nations trophy – a feat they’ve accomplished three consecutive years.  As I began to think of the game and the overall atmosphere, I realized that the photo I took of them posing with the trophy was truly a moment caught in time as all photographs are.

Famous landscape photographer, the late Ansel Adams, once said, “There are always two people in every picture: the photographer and the viewer.”

Now, being a landscape photographer, most of the photographs he took during his career were devoid of people, but he understood the relationship a camera lens can make between the person looking through it and the people looking at the resulting photo later.

During most football games, I’ll take several hundred, maybe more, photos, and I’ll put 40-50 on the One Feather Facebook page and use a few in the print edition.  Each photo I take is a moment of time.  It is a split-second of a person’s life that I manage to capture.

In the case of the team’s trophy photo from Friday, I really thought about the team as a whole.  This group of young men will never have that moment again.  Even if some of them return next season and defeat Choctaw again, that will be a different moment.  Friday’s moment was Friday’s moment.

Rachel Morrison, a cinematographer who most recently worked on the Marvel film “Black Panther”, once noted, “Photography was a way for me to freeze time and to capture the moments that were happy and healthy.  I saw a photo as a way to go back to a memory if I ever needed to.”

In this fast-paced world dominated by social media, we are inundated daily with memes and videos, but some have lost the subtle art of a good, solid photograph.  Videos capture an event, but a photograph captures a moment – a second in time.

I hope that the players in Friday’s game can look back at the photograph of them holding the trophy in 10 or 20 years and feel the same pride they did that night.  Good game boys, you should be proud, and thanks for letting me be a very small part of that moment.