“Unto These Hills” closes for season, presents staff awards 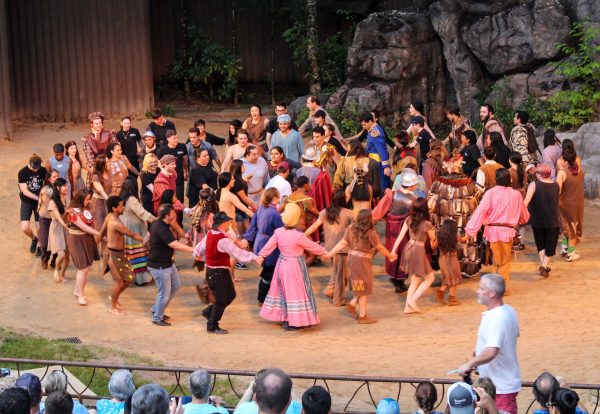 FRIENDSHIP: The Cherokee Friendship Dance was performed by the entire cast and crew of “Unto These Hills” to celebrate the final show of the season on Saturday, Aug. 18. (PHILENIA WALKINGSTICK/One Feather)

The 2018 season of the outdoor drama “Unto These Hills” closed on Saturday, Aug. 18.  For the pre-show entertainment, the Cherokee Historical Association’s administrative staff presented members of “Unto These Hills” and the Oconaluftee Indian Village with awards for outstanding job performance.

After the awards were presented, as is tradition, Lizzie Hull was presented with flowers from her son. Miss Lizzie has been a company member of “Unto These Hills” for 46 seasons, and it became a tradition with her husband to present her with flowers at the end of each season as an anniversary gift, a tradition that her son now carries on. The Cherokee Friendship Dance was performed by the entire cast and crew to celebrate the final show of the season.