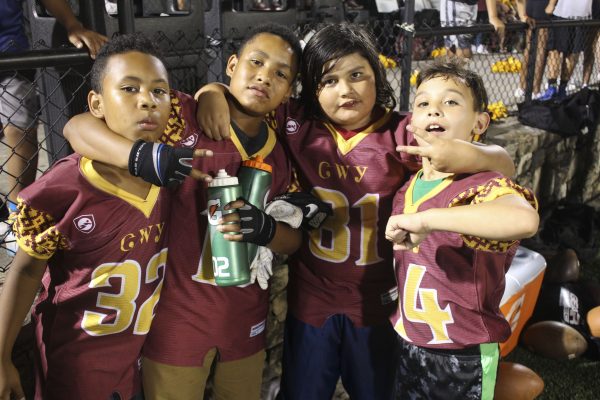 WATER: The Cherokee Braves’ waterboys (left-right) including Ray Jackson, Teddy Panther, Owen Bird, and Rupert Bird take a second out of their duties on Friday, Aug. 17 to pose for a photo for the One Feather. They are busy all game-long making sure the players are properly hydrated. (SCOTT MCKIE B.P./One Feather)

It’s football time again, and it hardly seems like the start to the season if I don’t watch Adam Sandler’s classic “The Waterboy”.  (SPOILER ALERT) For the eight of you in the country who haven’t seen the movie, it follows Bobby Boucher, from the bayou of Louisiana, who rises from waterboy to big-time college football hero.

One of the best lines from that movie is Bobby stating, “Now, that’s what I call high quality H2O.”

Bobby, who thinks his father died in the desert from dehydration, is obsessed with water and making sure that the players on the team he works with are properly hydrated.

As I was on the sidelines this past Friday, I really noticed the four waterboys working with this year’s Cherokee Braves varsity football team.  Friday’s opening night game was a muggy one for sure.  It wasn’t that terribly hot, but it was very humid – the perfect storm for dehydration and cramping athletes of which there were several.

Cherokee’s waterboys – Ray Jackson, Teddy Panther, Owen Bird, and Rupert Bird – ran onto the field during each break in the action to bring the players water.  Hydration is their job, and they are doing it well.

Hydration in sports is very important.  In an article on WebMD entitled “Drink up for sports and fitness”, Kathleen M. Zelman, MPH, RD, LD, writes, “Don’t rely on thirst alone to tell you how much you need to drink.  To keep those muscles working and avoid fatigue; it’s extremely important to drink plenty of liquids before, during, and after the activity.  A good guideline to use when preparing for an outdoor workout, whether it’s walking, running, biking, or tennis, is to drink about two cups of fluid two hours before the activity.”

She goes on to recommend drinking 4-6 ounces every 15-20 minutes to keep yourself well-hydrated.

Now, what to drink.

During “The Waterboy” movie, Bobby imagines Coach Klein saying “Gatorade not only quenches your thirst better, it tastes better too…”  Bobby responds, “No.  You people drinkin’ the wrong water.”

Well, Bobby has Harvard Medical School on his side.

In an article entitled “Trade sports drinks for water” on the Harvard Health Publishing blog, Patrick J. Skerrett, former executive editor of Harvard Health, states, “…drink when you are thirsty and don’t waste your money or calories on sports drinks – choose water instead.”

He goes on to say that sports drinks are laden with calories with some giving the equivalent of 10 teaspoons of sugar per bottle.

An August 2014 study by the University of California at Berkeley entitled “Looking Beyond the Marketing Claims of New Beverages: Health Risks of Consuming Sports Drinks, Energy Drinks, Fortified Waters and Other Flavored Beverages” states, “It appears that the marketing of fortified beverages as beneficial or health-enhancing is premature at best and deceptive at worst.  All of the beverages discussed in this report – energy drinks, sports drinks, fruit drinks, flavored waters, and sweetened teas and coffees – supply natural and artificial ingredients in quantities that are not at this time proven safe and have not been shown to provide the benefits that are claimed for them.”

So, in conclusion, players, drink plenty of water to stay hydrated.  Kudos to Cherokee’s waterboys.  And, make sure to watch “The Waterboy” this week if you haven’t already.  Trust me, it’ll put you in the football spirit.