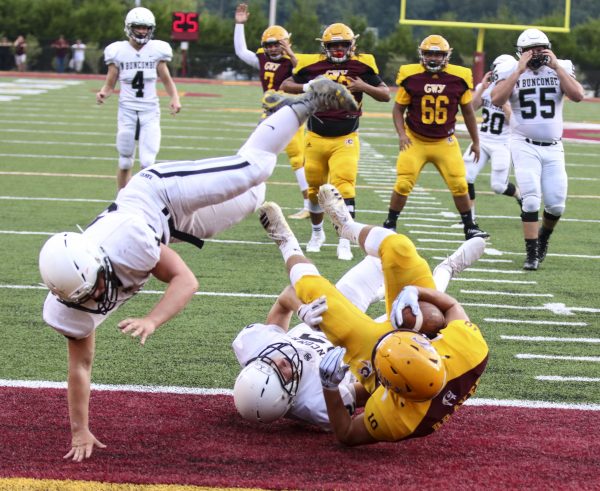 SCORING: Cherokee’s Cade Mintz (#10) jumps into the end zone with two North Buncombe defenders closing in. On the night, Mintz caught 8 passes for 138 yards and 2 touchdowns and had an 82-yard kickoff return for a touchdown. (SCOTT MCKIE B.P./One Feather photos)

Cherokee and North Buncombe ended the game very even in the stat books and very close on the scoreboard, but the Blackhawks managed to edge it out on the latter.  After making a first down on a key play with less than a minute left, North Buncombe (1-0) was able to run out the clock and secure a 24-21 win over the Braves (0-1) on a humid evening on Friday, Aug. 17 at Ray Kinsland Stadium.

The Braves got on the board first scoring on their opening drive.  At the 7:47 mark of the first, Bobby Crowe, Braves junior quarterback, hit Cade Mintz, junior wide receiver, on an 8-yard touchdown pass.  Rocky Peebles added the extra point and Cherokee led 7-0. 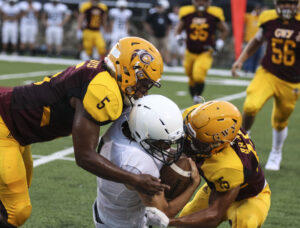 North Buncombe wasted no time answering that score as they drove down and scored on a 5-yard run by Christian King.  Following a penalty, the follow-up extra point failed and Cherokee led 7-6 midway through the first.

Mintz scored his second of the night on a 65-yard pass from Crowe with about one minute left in the first.  Peebles added the extra point and Cherokee took a 14-6 lead into the second quarter.

Several minutes later, North Buncombe’s Skylar Jutras ran 3 yards for a score.  King ran for the two-point conversion to tie the game at 14-14 which is how the half would end.

Both teams were forced to punt on their first possessions of the third quarter.  Then, midway through the quarter, North Buncombe took their first lead of the game as Josh Ramirez caught a 57-yard touchdown pass from King to make it 21-14. 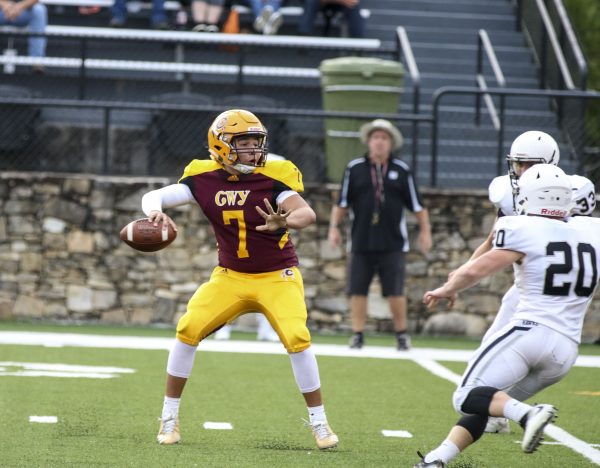 QB: Cherokee’s junior quarterback Bobby Crowe (#7) backs up for a pass in the first half as North Buncombe’s Dawson Fender (#20) rushes. Crowe completed 8 of 17 passes for 130 yards and 2 touchdowns.

Each team would punt once more in the quarter.

As the fourth quarter began, Cherokee drove deep into Blackhawks territory.  But, their drive stalled and they turned the ball over on downs following an incomplete pass in the end zone.

North Buncombe took over and drove down the field and kicked a 32-yard field goal and took a 24-14 lead with just over three minutes left in the game.

The Braves weren’t done, and Mintz took the ensuing kickoff to the house on an 82-yard run to get Cherokee to within three points (24-21).

The Blackhawks got the ball back with 2:49 left and were able to convert on two key first downs to seal the game.

During the game, Cherokee alternated at the quarterback position between Crowe and Alex Ben, senior, who completed 6 of 9 passes for 60 yards.  Isaiah Evans, Braves senior running back, had 17 carries for 79 yards.

Defensive statistics were unavailable for this game.

Cherokee is back at home on Friday, Aug. 24 at 7:30pm as they host Choctaw Central in the annual “Battle of the Nations” game.