This is what Adam Ross, the newly-crowned champion of the Harrah’s Cherokee WSOP Circuit Main Event, was shouting at the top of his lungs once the last card hit the felt on Tuesday, Aug. 14. In the final hand of the tournament, Ryan ‘The Janitor’ Phan went all in, and Ross’ pair of twos were enough to take the win. He turned to his wife, who had been on the rail supporting him for the entire day, picked her up and celebrated. 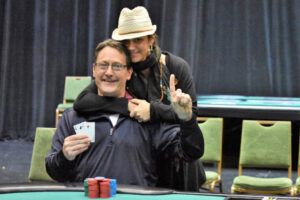 This stop marked the first of 28 series in the 2018/2019 World Series of Poker Circuit season. Ross wasn’t fully aware that along with his winnings, he will receive a free seat into next year’s Global Casino Championship. He says he is excited to compete with poker’s elite and will aim to win himself a bracelet to go with his shiny new ring.

The Main Event consisted of two flights with each player having the option to re-enter once per flight. By the end of the registration period there were 1,056 entries making up a prize pool worth $1,599,840 paying out 108 spots. Ross was the last player standing and pocketed $295,970 with the win.

Runner-up Phan is no stranger to the spotlight, and has a ring himself. He is also fresh off of an 11th place finish in the 2018 World Series of Poker $10,000 Main Event for his biggest career score of $725,000. At one point, Phan held more than a four-to-one chip lead but things started to go in Ross’ favor. Phan flopped two pair but Ross flopped a straight and doubled from there. The momentum shifted and the rest is history. Phan pocketed $182,990 for his deep run and is certainly nothing to sneeze at.

Ross says he plans on paying off his mortgage after this win. “I’ve been playing poker for a long time.  I’ve had a $30,000 cash but never the life-changer. This is the pay-off-my-mortgage life-changer. I’m gonna continue to play a little poker, and continue to be a sales manager at my job. I think I’ll play in Vegas – the Main Event next year,” said a teary-eyed, emotional Ross.

The WSOP Circuit hits the road and will return to Cherokee Nov. 22 – Dec. 3.