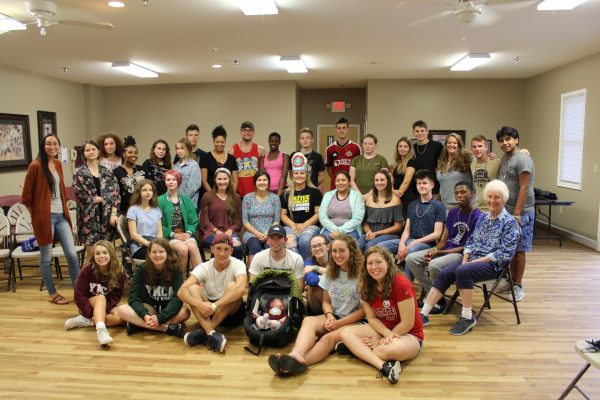 The Jones-Bowman Leadership Award Program Fellows traveled to Black Mountain recently to conduct a presentation on the history of the Cherokee to a group of students attending a retreat at the YMCA Blue Ridge Assembly. Participating in this retreat as ambassadors of the Eastern Band of Cherokee Indians, young leaders in the Jones-Bowman program and college students provided a powerful message to their audience.

The Sister Cities of Durham program at Blue Ridge is called Bridges 2018.  They have six Sister Cities in the world and three of them, Kostroma, Russia; Durham, England; and Durham, North Carolina met to explore their different pasts, present, and futures.  Ten 11th and 12th graders from each city, 30 students combined, will be learning about each other and what that means for them as newly formed friends.  Sister Cities is an ongoing forever relationship with the Sister Cities abroad and have been Sister Cities to each other in a triangle for more than 30 years.

Dot Borden, of the Bridges 2018 program, shared, “It is important that we understand one another to go forward more compassionately and lovingly into the future as a group when they return home.  That is where your students come in.  I think it is great that they are young and will be able to speak with truth and hope for both of our group’s common future together in our world.”

Alicia Jacobs, Jones-Bowman leadership specialist, said, “Providing the Fellows with the opportunity to share the rich culture of the Cherokee with other students strengthens their public speaking skills along with giving them the platform to share their cultural values. I am extremely proud of the fellows and how they represent the tribe, the Jones-Bowman Leadership Award Program and the Ray Kinsland Leadership Institute.”

Jones-Bowman officials noted, “Jones-Bowman Fellows did an outstanding job preparing for this presentation as they included the history of the Cherokee, forced removal, Qualla Boundary, cultural values, and progressed into their role as young leaders and ambassadors of the Eastern Band of Cherokee today. The thirty plus students were inquisitive asking thoughtful questions. The Fellows brought each student a corn bead necklace and postcard that included the Cherokee Core Values.”

Activities for the Jones-Bowman Leadership Award program are made possible through funding from the Cherokee Preservation Foundation for the Ray Kinsland Leadership Institute, a department of the Cherokee Boys Club.