ON THE SIDELINES: New season, new team…let them play

The last time we saw the Cherokee Braves football team in action, they were hoisting a 1A state championship trophy in the air following a rainy, sleety, snowy game against North Duplin.  That was a great day in Cherokee sports.  That was a day that many of us will never forget.  It was simply awesome to watch a team come together like that and, albeit it was cold for many, it warmed our hearts to see how a simple game brought a community together.

Well, that was then.  This is now.

That 2017 team has hoisted their trophy, received their rings, and some have graduated and are playing at the next level. They are forever etched in Cherokee High School sports history as they should be. 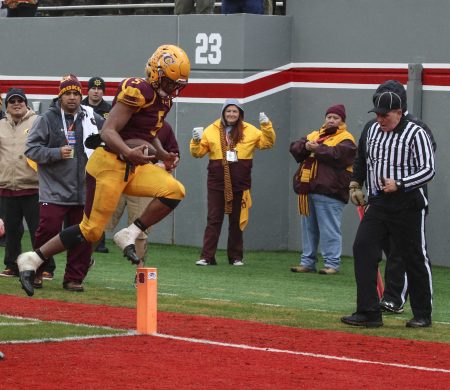 SCORE: Isaiah Evans, Braves rising senior, floats into the end zone during the 1A state championship game last December. He will be a leader for this year’s Braves team who opens their season at Ray Kinsland Stadium on Friday, Aug. 17 as they host the North Buncombe Black Hawks. (SCOTT MCKIE B.P./One Feather)

Now, it is almost time for the 2018 team to take the field and enjoy their time playing.

This year’s Braves campaign starts at home at Ray Kinsland Stadium on Friday, Aug. 17 against North Buncombe.  Cherokee’s 36-10 win over the Black Hawks last season was how they got their championship campaign started, and Braves’ fans are hoping for a repeat performance.

While many of the top performers from last year’s championship team are gone, there will be some familiar faces out there who will light up the field – Isaiah, Cade, Blake, Bobby, etc.  This is not a decimated team.  This is not a rebuilding year.  The accomplishments of this team will be predicated on how well they gel as a team.

The late Casey Stengel, legendary New York Yankees manager, once said, “Finding good players is easy.  Getting them to play as a team is another story.”

As fans, one thing we shouldn’t do is compare last year’s team to this year’s team.  Even if this year’s squad goes undefeated and completes a back-to-back state championship season, they still won’t be last year’s team.  That’s not to say they won’t be as good or maybe better, who knows at this point?  But, teams are different from year-to-year, and we have to let them develop and play their games.

At the end of the day, we watch football because we love the game and we love the atmosphere.  So, whether this year’s Braves team goes 15-0 and wins more rings or they go 0-12 and we’re sitting at home in early December, at least we got to watch some football and experience Friday Night Lights for another season and that can’t be bad no matter how you cut it.