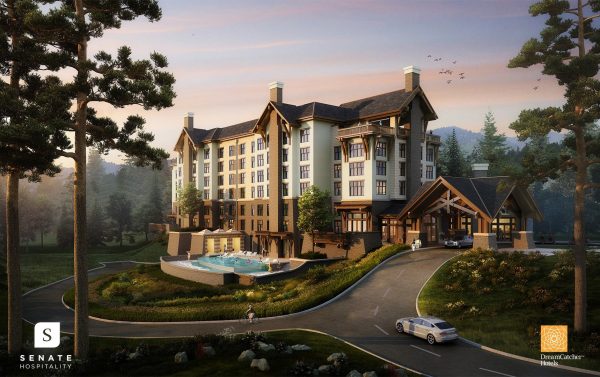 HOTEL: An idea to construct a 125-room hotel (shown in rendering) at the Sequoyah National Golf Club was tabled by Tribal Council during Budget Council on Tuesday, July 31.  Res. No. 291 (2018), submitted by Tribal Planning Board, states “the Sequoyah National Golf Course Resort Hotel is approved by the Tribe and agrees to enter into a development agreement and an operational management agreement with Senate Hospitality Group, LLC…” (Rendering courtesy of Senate Hospitality)

An idea to construct a 125-room hotel at the Sequoyah National Golf Club was tabled by Tribal Council during Budget Council on Tuesday, July 31.  Res. No. 291 (2018), submitted by Tribal Planning Board, states “the Sequoyah National Golf Course Resort Hotel is approved by the Tribe and agrees to enter into a development agreement and an operational management agreement with Senate Hospitality Group, LLC…”

The proposed name of the facility is “The Lodge at Sequoyah National Resort” and would include 125 rooms, a 75-seat three-meal restaurant, Golf Pro Shop, private meeting rooms, heated outdoor pool, rooftop bar and observation deck, VIP Suites with assigned golf carts, conversion of the existing Pro Shop to a Special Events Center, tennis courts, and a shuttle service to Harrah’s Cherokee Casino Resort. Cost of the total project was represented at between $25.6 million and $26.5 million, depending on how the Tribe pays for it.

Principal Chief Richard G. Sneed said during Tuesday’s meeting, “The Golf Board has asked for years for a hotel out there.  What we lack is the ability for stay-and-play… This would complete the amenities that are needed out there.  Most golf courses have condominiums that are either for purchase or for rent or there’s a hotel.  As it stands right now, there is a very small club house which is really undersized.”

Chief Sneed also said there is an opportunity to brand the hotel to expand into other markets beyond Cherokee and stated he supports the idea of the hotel at the golf course.  “This would be a year-round destination and a year-round venue…I think this is another great opportunity for economic development and diversification for the Tribe.”

Birdtown Rep. Albert Rose questioned the process that led up to the proposal.  “I’ve had calls from some TERO vendors who are qualified and who were never given a chance to bid on this, and if they’re not given a chance to bid it opens you up for a lawsuit…It wasn’t put out for RFP…you guys keep going around that.  And, I took an Oath, and I’m going to stand by that Oath.  I’m here for the TERO vendors.  They’re calling me.  They’re upset…”

Curtis Wildcatt, Golf Board chairman and TERO Office manager, commented, “I’d advise a work session with the people involved just so everybody can get on the same page.  We don’t want misinterpretations of this or that.  I will give you our interpretation which is always the same, enrolled members first.”

Big Cove Rep. Perry Shell inquired if there were any TERO-qualified designers and stated that he voted against the golf course when it was first built.  I voted against it because I didn’t think it was going to make it, and it hasn’t made it up to this point.  It hasn’t, and it’s been subsidized by the Tribe…”

He added, “Will this make it self-sufficient?  Will Rogers said, ‘If you find yourself going in a hole, quit digging.’  Will this make us go further in a hole or will it make enough revenue to put us in the black, to make some money at this golf course?”

The course, designed by Robert Trent Jones Jr. and Notah Begay III, noted Navajo golfer, has been subsidized by the Tribe annually since opening in 2009.

Earlier in the meeting, Wildcatt noted, “I think we’re going to be headed in the right direction.  Possibly, within the next two years, we won’t be here seeking this assistance.  And, it’s come down tremendously from the first year – the first year, I think supplementation was 1 million dollars. Right now, I think we have it in great controls of around $100,000 plus.  We’ve come a long ways.  It is an added amenity to our gaming industry and our community members.”

Painttown Rep. Tommye Saunooke made the motion to table the legislation and commented, “I think all of us support the concept, but all of us too have to go by tribal law and that’s what we’re trying to do here.”

Tribal Council went into a brief executive, closed session to receive legal advice from Carolyn West, Tribal Council’s Counsel.  After coming out of the executive session, they voted to table the legislation for a work session.

Tribal Council Chairman Adam Wachacha stated, “We’re going to set up a work session with the Golf Board as well as TERO. We’re going to work together to try to create the RFQ (Request for Quotes) and RFP (Request for Proposals) process because this is something that Council wants.  We just want to make sure that everything is in order moving forward.”

The day prior to the Budget Council session, Monday, July 30, Tribal Council held a work session to discuss the legislation.  Glen Malone, with Senate Hospitality Group (SHG), spoke to the Council regarding the proposal. Located in Nashville, Tenn., SHG is a “manager and developer of hotels”.

Malone opened his presentation with a list of hotels that his firm has built which includes several Embassy Suites and other national brand hotels located all over the country. He recommended that the Tribe not go with a franchised or existing branded hotel name for the golf course hotel. He said he has “engaged” Dreamcatcher Hotels on this project because they develop hotel concepts that are independent and have high standards with proven designs at low cost to the Tribe.

Questions from Council during Monday’s work session included concerns that the Cherokee Code be followed regarding a Request for Proposal process or ensuring that a sole source be justified, that Cherokee cultural elements be prominent in the design, and that the new facility “match” in look and feel to the existing facility.

The videos of both meetings can be found online at www.ebci.com.