Two Cherokee youth represented the Eastern Band of Cherokee Indians well at two recent 4-H Presentation Competitions.  Kaelin Jones and Lucian Davis both placed in the 11-13 age group at the District Competition held in June at Madison High School as well as the State Competition held July 21 at N.C. State University in Raleigh.

Jones, a rising freshman at Jackson County Early College, placed first in the district and second in the state in the Fruits & Vegetables Use competition where she prepared a salad.  Davis, a rising freshman at Cherokee High School, placed second in both the district and state Egg Cookery competition where he prepared an omelet. 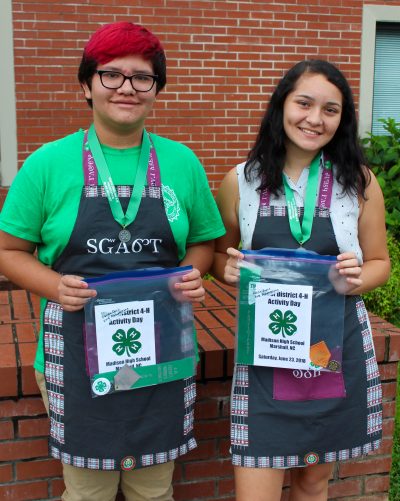 Both vegetarians, the two explained their dish’s nutritional value as well as gave some information on being a vegetarian.  During the competitions, both wore kitchen aprons of their own making which included a variation of a Cherokee basket design as well as the 4-H motto “To make the best better” written in the Cherokee syllabary.

According to Sally Dixon, EBCI Cooperative Extension 4-H youth development extension agent, there were 32 total categories in the Presentation Competition.  “There are a number of cooking categories, but there’s also everything from careers and entrepreneurship, arts and communications, agriculture science, etc.”

She added, “They were in the demonstration categories and you’re expected to produce some type of food product. For Kaelin’s, she talked about the nutrition behind the fruits and vegetables you eat as a vegetarian.  She talked about vegetarian needs and how many people assume that they don’t have a lot of protein in their diet and how that’s actually not true.  They tend to hit too hard on the protein and not enough on fiber.  She made a salad and did a nutritional analysis for the entire dish.”

Dixon said that in the Egg Cookery category, the dish must be cooked in front of the judges.  “He (Lucian) made an omelet and then talked about the nutrition behind eggs and how they are healthy and an economical source of protein.  Since he’s a vegetarian, eggs are a good way for him to add protein to his diet.  He also explained how to choose a good egg at a grocery store.  So, it’s a full circle of understanding the nutrition behind what you’re doing.”

According to the North Carolina 4-H program, a total of 319 youth competed in the State Presentation Competition.