I have found the cemeteries are some of the most interesting and thought-provoking places that a person can spend time. I have walked several in our community, state, and nation. There is something very peaceful and reverent about them. Fields of green and stone, commemorating lives down through the centuries.

Many times, I will seek out a cemetery when needing to contemplate life issues, both personal and communal. I did so before the meeting held at the Chief Joyce Dugan Cultural Arts Center on June 28. As I walked this cemetery, I was struck by the beauty of the place. It is one of our local graveyards, well-kept and green. You could tell that a decoration had been held recently because most of the gravestones and monuments had been ornamented with beautiful, fresh flower arrangements and other remembrances for loved ones who had past.

But, what caught the eye in this cemetery were the mounds of fresh red clay dirt. Some of the areas of fresh dirt were for graves where the earth had sunken. Over the years, old vaults and caskets will decay away and collapse, causing the grass and topsoil to sink in front of a grave. A good grounds crew had come in and filled in those sunken-in places. It had been done recently, as no grass had started to grow over the patches of fresh red clay.

Along the way, I found several high mounds of the fresh soil on top of graves with no stones, only a small plastic marker with a small slip of paper with a name, picture, date of birth, and date of death. Many of those dates of departure were very recent, some within the last few months. A small plastic marker and a mound of fresh red clay.

As I considered the discussion to come that evening, I wondered about how many of these mounds were at the cost of lives cut short by the use and abuse of drugs. I thought of wasted talents, relationships, and time. I thought of grieving families and friends. I thought of the confusion and anger felt by so many in our community. A cemetery is a good place to count the cost of decisions made based on fleeting satisfaction and short-term gratification.

When I was in my teens, there was a program that came on television called “Scared Straight.” Young people who were showing signs of a propensity toward negative behavior would be brought to a criminal correction facility to show them what would face them if they continued down the path they were on. Hardened criminals would use their lives as examples of what was to come for these young people. There were fear and tears. Many of the youth took the message to heart and cleaned up their act, at least if the television production crew kept tabs on them. Others would feign compliance but quickly return to their bad behavior. 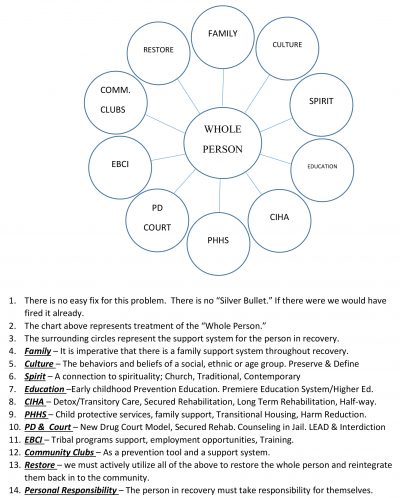 RECOVERY: Above is a chart developed by Principal Chief Richard G. Sneed showing the tenets needed for a successful recovery from substance abuse.

As I listened to the discussion at the town hall meeting, it was obvious that there is great concern from government officials of our and neighboring communities. And, there was a sense of the heartbreak that comes with the abuse of narcotics. Most important about this meeting is that those who grieved the loss of a loved one spoke of that devastation, and those who had been on the path that ends under one of those red clay mounds spoke of how they turned their lives around with the help of those who cared.

Like that old jailhouse series hoping to turn youth away from lives of crime, one of the most effective ways of communicating the ravages of negative behavior is to interact with someone who has come out the other end of that negative experience. That is what “Scared Straight” was all about. The convicts could show those wayward teens the long-term impact of that behavior. They would talk about the consequences and the high prices they paid for their behavior; loss of freedom, alienation from friends and family, and a life of living in a network of people who don’t care about you, but what you can provide for them. Some of those programs ended with a trip to the morgue or funeral home, showing the ultimate end of some choices.

The most impressive thing about the town hall was the steady stream of recovering drug users and their family members who could share, first-hand, the pain and loss of drug addiction. Person after person shared their story. It was a bit of therapy for them, getting to release the burden of the habit and talking about the lost time, faded health, and broken dreams. They spoke about the disease, destruction, and death. The words were from members of our community; people you would know by name and face. They may even live in your home. Young and old, drug abusers came forward and shared some embarrassing and heartbreaking stories of those who let drugs take control and didn’t stop before it was too late.

They also talked about hope and redemption.  Recovering drug users told of their climb out of the culture of drugs. They talked about breaking away from the “family” of users; severing ties with those who were dragging them down. They entered rehabilitation programs, hospitalized themselves, and sought friends and family support. They decided to turn their life around and took steps to make the turn. Some talked about the journey, sometimes taking one step forward and two steps backward. And, they talked about finding peace in relationships instead of a needle or a pill.

It was a very good thing to see our leaders, the Executive Office, many of the Tribal Council leaders, the Chief Justice, many of our and other county law enforcement officers, many of our leaders from the public health system, come together to listen to the community about our common enemy, drug abuse. As was mentioned at the meeting, this is a battle that is being fought all over the world. Every community is in a battle for the lives and future of their members. Several talked about there being “no silver bullet” to take out this problem. We hope that with compassion, commitment and resolve, our community will triumph over this issue.

Just as one of the recovering addicts said, “Recovery is a life-long commitment.”

You are never really cured. That may be where we are as a community and as a society.  We may only be able to mitigate the effects of drug addiction, but never truly eradicate it.

Let’s all work together to stop this heartbreaking cycle within our community. Drug abuse happens within many different age groups, ethnic groups, and societal groups.

John Bradford, a 16th century Englishman, said, “There, but for the grace of God, go I.”

You and I, under a certain set of circumstances, are just as likely to fall into drug abuse as anyone else. Whatever it is within us that eliminates that desire, we must spread it to those who don’t have it. My hope and prayer are that we will find ways to bring these that are in the bonds of drug abuse back into the mainstream and that we will see fewer mounds of red clay in our cemeteries.