COMMENTARY: Tribal member experiences discrimination at Harry’s on the Hill

It has been a while since I have had a different vehicle and thought about trading mine.  I found a couple of SUVs that I liked at Harry’s on the Hill in Asheville near Sam’s Club.  As we drove up to the dealership, I noticed a big towering statue of an Indian out front.  Seeing the figure should have been my first clue of what I was about to endure.

Discrimination and hate are out there and going to Harry’s on the Hill; I got to experience it first-hand.  At first, it made me angry.  Then, I was disheartened and remorseful that this still happens.

I am writing this because we do not have to be mistreated.  As a Cherokee Nation, we can stand up for ourselves and others.  Making others aware of instances like this can prevent them from happening again.

We need to look out for each other and make those that are in the market for a vehicle aware that the salesperson is not your friend and that they may have alternative intentions. 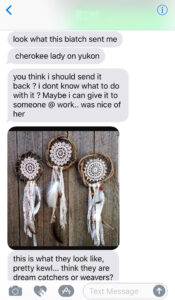 SCREENSHOT: The image above is a screenshot of a text message Sabrina Arch, an EBCI tribal member from the Big Cove Community, received from a salesperson at Harry’s on the Hill car dealership in Asheville.  The photo in question and the actual items shown were not sent by Ms. Arch.  In fact, this is a link to the website where the photo was taken from the internet: https://hamptonandharlow.com.au/product/handmade-dream-catcher/.

Back to Harry’s on the Hill, I tried to negotiate with a salesperson, but he seemed like he did not want to work with me or go down on their prices.  Remember, they know we are Cherokee, and it is close to per cap, so they increase their costs.

However, when I start looking for a new car, I do my homework – researching dealership websites for the details of vehicles listed which includes: mileage, asking price, and VIN.  When I provided the bank with the information, they informed me that the asking price was way too high.  Knowing the values of all the vehicles, I tried to get Harry’s on the Hill to meet me halfway.  They did not want to work with me.  Yes, I wanted a car, but it should not be this hard.

In their eyes, I was an uneducated Native American woman with money.  I had been warned not to use any of the surrounding dealerships because they hate us and are jealous of us because of the extra income we receive.  I thought they would try and work with us more because we are helping them earn extra commissions by bringing them more business.

Feeling mistreated, I took my business elsewhere which ended up being a two-hour drive to another dealership.  At this dealership, I was treated as a customer with respect, and they were willing to work with me.  When I left with a new car, I took a picture of my new car and sent it to the Harry’s on the Hill salesman that did not want to work with me.  He could have easily had my business if he had treated me like a valued customer.

His reply, via a text message, obviously not meant for me was “look what this biatch sent me” and “Cherokee lady on Yukon”.

What is even more demeaning is that once he realized that the sent the message to the wrong person, he did not try to correct it or apologize.  Instead, he continued to act like he was still messaging a co-worker that seemed like he was trying to ask about what his co-worker thought about some dreamcatchers someone had given him, and he was contemplating sending this gift back.  By looking at the picture, it looks like a screenshot off of the internet.

I found out the hard way.  I am glad to know how he honestly feels and believe this is the shared work environment of Harry’s on the Hills dealership.  By having the Indian mascot up as you enter this dealership can be misleading and needs to be taken down.

This is hate!  We deserve better!  I pray that if you are looking to purchase a vehicle that you take time and do your homework.   No one should have to go through this.  I hope that you get treated decent and with respect, without having to travel further away!  As a Tribe, we can unify and stand up to others trying to take advantage of us!