EDITORIAL: Thank and serve the living, as well as the dead 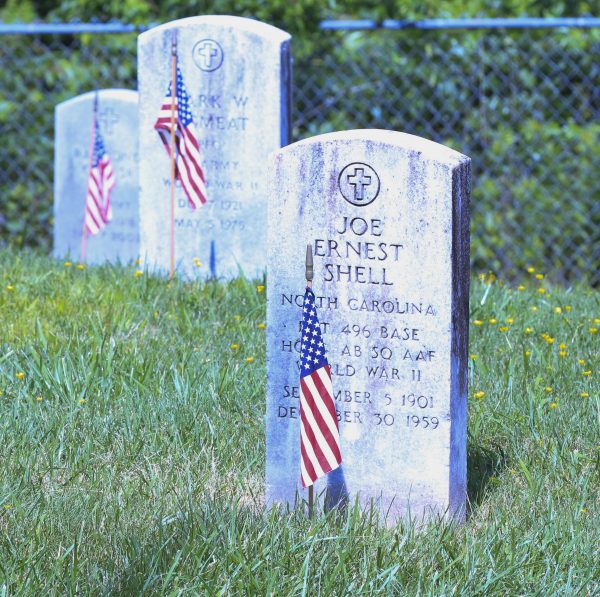 MEMORIAL: Graves in the Yellowhill Veterans Cemetery are adorned with American flags on Memorial Day, aka “Decoration Day”, on Monday, May 29, 2017. (SCOTT MCKIE B.P./One Feather)

According to one website, over 42 million people serving in the American military have died during wartime since the Revolutionary War. Many more deceased veterans served in time of peace. On Decoration Day, or Memorial Day, we have a day of remembrance for those who served. The pages of Facebook are filling with videos and pictures of families gathering at the cemeteries to place flowers and flags at the graves of beloved brothers, sisters, and friends who gave in service to their people and communities.

Serving in the military is a great and weighty calling. The defense of nations takes brave women and men who will be called upon to stand ready to give blood, sweat, and even life if necessary, so that you and I may have the life and freedom that we all cherish. We, who benefit from the dedication of these people, cannot really know the great sacrifices of those who serve.

Many service persons endure long separations from the life and love they have at home. Home becomes a word with temporary meaning, a place of residence until the orders come for the next deployment or assignment. Letters, emails, voice and video chats make separations easier, but they are no substitute for the warmth, touch, and presence of family.

Training for military duty is grueling. Soldiers must be in top condition always, to be ready for conflict and to engage in war when necessary. Soldiers must be proficient in the use of equipment and weapons that they will need to do their duty. So, constant drills and classes are added to their daily routine along with the physical fitness training. Families suffer along with their enlisted personnel, deprived of integral parts of their families, having to fill in the gaps that are left in lives when loved ones are not physically there to lean on.

For those who are required to engage in conflict, to confront an enemy, there is added anguish. Taking human life, even under orders and conditions of war, is a traumatic experience. Our minds are not geared to deal with the concept of killing. Even for good of country and safety of our loved ones and community, the desire of every sane person is to preserve life if possible. Men and women during wartime see and engage in terrible things; things that follow them home in their minds and cause them and their families problems. Post-traumatic stress disorder is a term that was born out from those terrifying experiences and the effect they had on returning soldiers.

Not everyone appreciates the sacrifice of the soldier. Like many front-line workers, soldiers get the blame for decisions that are not their own. When a segment of the community was and is against a war or conflict, for whatever reason, inevitably, the ones on the front lines of war will get the criticism for those deciding they will engage in it.

Examples are how many of our soldiers from the Vietnam and Gulf Wars were treated when they returned home to be greeted by angry protesters who screamed obscenities and spat at them.

Many of our military service persons are so disconnected from civilian life after serving that they have a very difficult time finding their way back home, literally.

According to the National Coalition for Homeless Veterans (NCHV), “America’s homeless veterans have served in World War II, the Korean War, Cold War, Vietnam War, Grenada, Panama, Lebanon, Persian Gulf War, Afghanistan and Iraq (OEF/OIF), and the military’s anti-drug cultivation efforts in South America. Nearly half of homeless veterans served during the Vietnam era. Two-thirds served our country for at least three years, and one-third were stationed in a war zone. About 1.4 million other veterans, meanwhile, are considered at risk of homelessness due to poverty, lack of support networks, and dismal living conditions in overcrowded or substandard housing. Although flawless counts are impossible to come by – the transient nature of homeless populations presents a major difficulty – the U.S. Department of Housing and Urban Development (HUD) estimates that 39,471 veterans are homeless on any given night. Approximately 12,700 veterans of Operation Enduring Freedom (OEF), Operation Iraqi Freedom (OIF) and Operation New Dawn (OND) were homeless in 2010. The number of young homeless veterans is increasing, but only constitutes 8.8 percent of the overall homeless veteran population.” (www.nchv.org)

Many of us look at Memorial Day as just an extension of our weekend activities; another vacation day. I urge you to remember the sacrifices made. Think about how your life would be different if it were not for the sacrifices of the men and women who hold the line in our defense, and the ones who have done it for centuries. Many of these warriors are probably in your own ancestry.

As I mentioned last week, visiting a cemetery is a humbling and meaningful journey. I have not visited a single graveyard that did not include members from branches of military service. Remember your loved ones, friends, and other important people in your life who served and now have passed on. Take a flag or flower to their grave in remembrance. And, after you do that, seek out a veteran who hasn’t made that final journey yet and show him or her how much you appreciate the sacrifice he or she made for you. Buy a meal, donate time or money to a homeless veteran program or provide care for someone in a rest home. Use this extra day, not for yourself, but in remembrance and honor to those who served and are serving. That is how you really honor the dead; by serving the living. If you do, you will truly have a “Happy Memorial Day”.