EDITORIAL: Lies we tell ourselves about off-Boundary voting 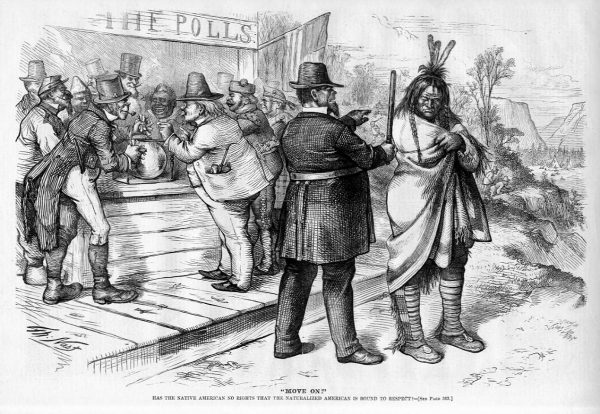 MOVE ON: Illustration from Harper’s weekly dated April 22, 1871. During this time in America, Natives Americans didn’t have the right to vote and were not recognized as citizens. Described as “A policeman ordering a Native man to “move on” away from a voting polls around which are clustered stereotyped ‘naturalized’ Americans”. (Library of Congress archive)

My vote won’t count, they have already made up their minds. Hundreds of millions of dollars are spent every election cycle to get names, faces, and biographies in front of your eyes to convince you to cast your vote for people who are on the ballots. Have you noticed that about this time in every election year (and again just prior to the November primaries), there are a parade of candidates for town, county, and state positions that ask for time before Tribal Council’s cameras? These politicians know that your vote could be the difference in them being in the game or sitting on the sidelines. There are some that take the cynical position that voting is somehow rigged so that their vote will not count or the manipulation is so strong that their vote will not be relevant. Most of those who imply this manipulation are jaded because their candidate has lost in the past or they are not in the majority or mainstream in position, by their own perception. The reality is that intentional vote manipulation is a criminal offense and rarely happens in town, county, and federal elections. When it does happen, it makes headlines and, therefore, looks bigger and more prevalent that it really is. People get elected by the preponderance of votes by individuals; and every vote counts.

We live on the Boundary, so decisions made off-Boundary won’t impact us. Economies and municipal services, on and off the Qualla Boundary, are intertwined. The Tribe works in many agreements with local law enforcement, emergency, fire, and hospital services through mutual aid agreements. The Executive and Legislative Branches of our government are constantly meeting with county, state, and federal officials to gain agreements that will benefit tribal members on and off our Boundary. Our economy and commerce are mingled with the those of our neighboring counties and state. Your vote selects those individuals that our government officials will be dealing with. Do you really believe that it doesn’t matter who is in power in our neighboring counties making decisions? For example, who still owns and controls the Nikwasi Mound?

Cherokee people don’t care about what goes on in the municipalities around us. Did you know that there is a tribal member making a run for a commissioner’s seat in Jackson County? Did you know that there is a tribal member trying to keep his seat as a commissioner, even trying to unseat the current chairman, of the Swain County Board of Commissioners? And, did you know that there are several tribal members in the regional judicial system, at least one up for reelection this year? Just like any other people group, there are many Cherokee people who gravitate to public and community service. And, many of those people have figured out that one way to make things better for their fellow tribal members is to work from inside other municipal governments to protect the rights of all people. Sure, they may live off the Rez, but their hearts are still Cherokee and their hearts’ desire is to build strong bonds and networks that will lift everyone up, including their tribal families.

Cherokee people can’t make a difference in county, state, and federal elections. When you cast your ballot in town, county, and state elections, there is no box on the ballot that asks you to tell the election board what your race is so that they may void that ballot. Cherokee people vote the same and their votes counts the same as any other person who comes to the polls. It wasn’t always so. Not until 1924 did the U.S. Congress pass legislation to declare Native Americans citizens of the U.S and even then, the law was caveated that citizenship was limited to those who took allotments under the Dawes Act of 1887.

I found this bit of historical commentary at nativeamericanroots.net, “In 1920, a large number of Eastern Cherokees – including Cherokee women – registered to vote. As a result of Cherokee participation in the election, Republicans won almost every office in Jackson County by narrow margins. The Democrats protested the election results claiming that the Cherokee were not eligible to vote. As a result, Cherokee votes were thrown out on the basis that the Cherokee were non-citizen wards of the United States.”

The state argued with the federal government and the Tribe through 1940 over the voting rights of Cherokee people. Even following World War II, Eastern Band Cherokee Indians war veterans were denied the right to register to vote. It took rulings by other states to finally reduce the resistance to Cherokee voting enough to allow our people to “participate in American democracy”. Our ancestors’ fought against the push to prevent our visits to the polls was because both sides knew our votes make a difference.

It is not important if I don’t cast a vote in off-Boundary elections. We have heard much talk of cultural and ancestral pride over the past few months. Our ancestors fought for our right to go to the polls in these elections because they knew that it was important for us to have a say in those state and municipal elections around our Boundary, in North Carolina, and in the United States. Cherokee people started running for offices because they knew it was important for the Tribe to be represented in local, state, and federal government. We need to be part of the decision-making process. It is essential that we strive to elect leaders off-Boundary who genuinely care about those who live on the Boundary and our family members who live in their districts. It was important in 1887 and it is important today. Make this May 8 primary the election that we stop lying to ourselves and we do the important thing, the right thing for our people. Vote.