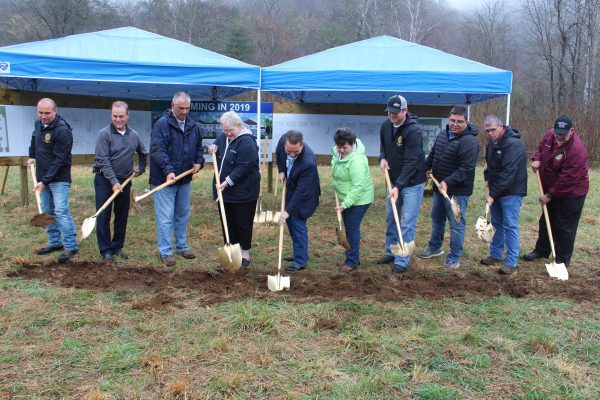 Tribal leaders and housing officials of the Eastern Band of Cherokee Indians gathered on the rainy afternoon of Wednesday, Feb. 28 to break ground on a new housing opportunity for tribal members.  The Hwy. 19 Housing Complex, located in the Painttown Community, which will be completed sometime next year, will include 60 total units including: 12 two bedroom, one bath; 32 three bedroom, two bath; and 16 four bedroom, two bath.

“It’s another beautiful day, not because of the weather but the way the Tribe is today, that we’re able to push projects out like this for our people,” said Travis Smith, EBCI Secretary of Housing.  “That’s what makes it beautiful.  We’re very fortunate in what we have and to be able to provide for our people today.”

Vice Chief Alan “B.” Ensley, noted, “I would like to thank some of the older Council members including (Painttown Rep.) Tommye Saunooke.  This project began in 2002, but I want to thank the Chief (Sneed) too for picking this project up and moving it forward…some of the projects get slowed down, but I really want to thank the Chief for really pushing this project.  We know what the rental and the housing needs are for the Tribe, and this will take us a long way.”

He added, “When the project was first presented to Council, I mentioned that we could build in Yellowhill, Snowbird, and all of the different communities.  So, hopefully, that’s where this project will lead to.”

Both of Painttown’s Tribal Council representatives were present for the event.  Rep. Saunooke commented, “This has been a long time coming and we’re just thankful.”

Rep. Lisa Taylor said, “We’re just thankful to be getting this housing for our enrolled members.”

Principal Chief Richard G. Sneed noted, “We know the needs of our people.  They need housing.  They need it now.  Thank you to Tribal Council for appropriating the funds when they did.  One of the goals and objectives of this administration is to get housing on the ground.  And, so, I’m grateful to HCD (Housing & Community Development) and T.W. (Saunooke) and the legwork that you did on this on the front end and everybody at HCD and Housing and the work that they’re doing.”